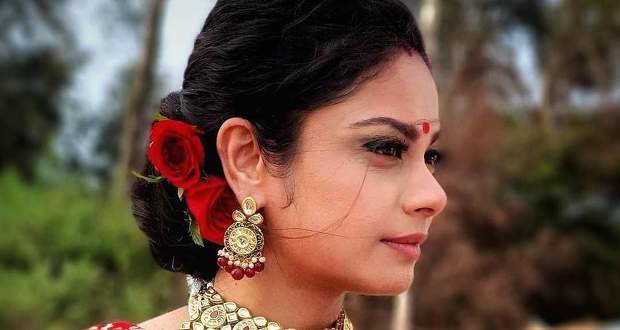 Today's Molkki 30 April 2021 episode starts with Purvi announcing that the wedding will happen and reveals to Virendra that Manas was kidnapped.

Further, Purvi and Virendra exchange Varmala and sit for the wedding.

Anjali tells Prakashi her fears while Prakashi tells her that she still has her special weapon and tells her to do as she says.

Purvi imagines dancing with Virendra on the song 'Hum Tum' at the beach.

Virendra and Purvi start doing rounds of the holy fire while Purvi remembers her Molkki marriage with him.

Anjali goes back to standing beside Prakashi while Sakshi comes towards the mandap.

The kids and Virendra notice Sakshi and call out to her while Purvi gets shocked realising that the lady she helped is Sakshi.

Juhi hugs Sakshi and they share an emotional moment.

Virendra leaves Purvi at the mandap while the gathbandhan catches fire.

Sakshi and Virendra cry seeing each other and hug while Purvi cries remembering her moments with him.

Upcoming Molkki episode update: Purvi to have a breakdown.

© Copyright tellybest.com, 2020, 2021. All Rights Reserved. Unauthorized use and/or duplication of any material from tellybest.com without written permission is strictly prohibited.
Cached Saved on: Thursday 27th of January 2022 02:55:37 PM