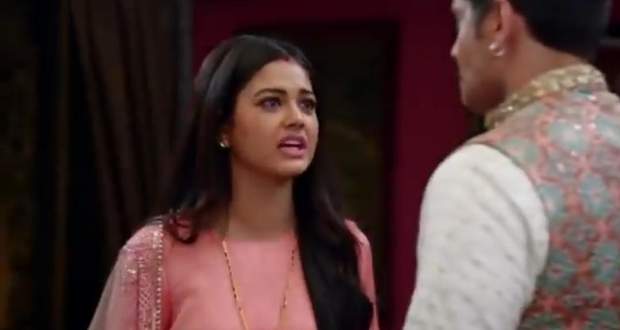 Today's Molkki 30 December 2020 episode starts with Virendra saying that he will keep Shakshi's belongings in front of his sight.

Purvi gives him Shakshi's outfit and says that he should keep that also in front of his eyes.

Elsewhere, Priyashi hears Anjali telling Jyoti that she has to trap Vaibhav in love trap as he is rich and would give her luxury while Priyashi thinks to also get Vaibhav to fall in love with her to get the luxury.

Virendra tries to leave but Purvi stops him and confronts him saying that she will not tolerate him calling her a thief and disrespecting her self esteem.

Next morning, Priyashi decides to give Vaibhav handmade dessert when Jyoti comes there wearing a western outfit.

He tells her that he will introduce her to his friend the next day which makes Priyashi jealous.

Later, Purvi is teaching the kids when they reveal it to her that Anjali gave them the outfit and jewellery to give it to her.

Purvi goes to Anjali's room and berates her saying that she will never let her plans get successful.

Late at night, Purvi sees someone outside her room and follows her while someone steals Shakshi's necklace from Virendra's cupboard.

Purvi sees that Bhuri is going outside at night and come back to her room to see that the door is open but thinks that it might be the wind.

In the morning, Virendra comes downstairs and again accuses Purvi of being a thief.