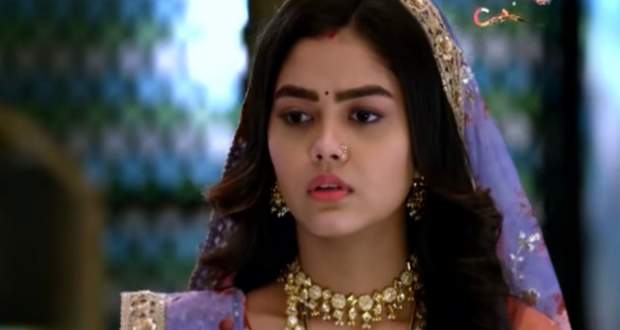 Today's Molkki 30 July 2021 episode starts with Virendra waking up and Purvi romancing him as she tells him to get ready as she has a surprise for him.

Virendra and Purvi leave in the car while Aarav calls Charansingh and gives him information about their vehicle.

He praises Aarav and tells him that he will cause Virendra's accident leading to Virendra's death and him becoming the new Mukhiya.

Nandini overhears Aarav and asks him whom he was talking to but he lies saying that he is preparing a gift for Purvi and Virendra.

Purvi romances with Virendra when she sees Priyashi and Veer on the road holding hands and gets confused as to why Priyashi lied to him.

Purvi tells Virendra to stop in the middle of nowhere and takes him inside the jungle while Charansingh orders his men to remove petrol from Virendra's car and leave just a little of amount in the car.

Purvi surprises Virendra by giving him a picnic the same as the one he gave her in Goa.

They make utensils from Mud and express their love to each other.

Elsewhere, Prakashi and Anjali try to instigate Nandini against Purvi but they fail as she is reluctant to trust Purvi.

Nandini leaves while Anjali sees Priyashi and Veer coming together and smiles at them as she tells Priyashi about it.

Meanwhile, the car runs out of fuel and Purvi takes Virendra inside a hut while telling him to enjoy the moment.

Anjali then manipulates Priyashi and tells her that she can attract Veer as she is going to give an holiday to all the servants.

Purvi changes into Virendra's Kurta and dances in the rain while he lights a fire.

He is about to kiss her when a shot is fired towards them.

Purvi changes her clothes and goes from there with Virendra while she takes him away in the wheelchair.

© Copyright tellybest.com, 2020, 2021. All Rights Reserved. Unauthorized use and/or duplication of any material from tellybest.com without written permission is strictly prohibited.
Cached Saved on: Monday 17th of January 2022 09:44:51 AM