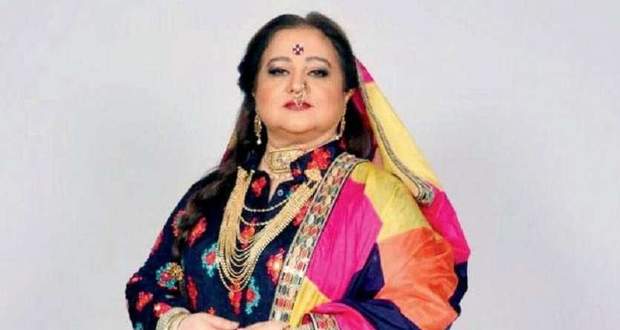 Today's Molkki 30 March 2021 episode starts with the Inspector thanking Prakashi for cooperating and saying that they didn't find any clue.

Prakashi gets calls after calls from the goon but she doesn't pick it up in front of the inspector and lies that it is her Aunt's call from Rohtak.

The police leaves while giving the information that no one is allowed to enter or exit the Mansion till Purvi is found.

Prakashi pics up the goon's call and gets informed that Purvi has run away.

Prakashi tells him to find her.

Purvi injures herself while knocking on the window while the goon comes there hearing the noise.

She hides from him and falls as she starts feeling dizzy.

Elsewhere, Sudha gives the phone number to the Inspector and says that Purvi had called the kids from this number and says that she is in a godown behind Shakshi mill.

The police say that it falls under UP police station and says that he will send an officer to bring her.

Prakashi is tensed as both Sakshi and Purvi have managed to save themselves while Anjali talks bad about themselves.

Prakashi reprimands her for speaking negatively all the time and plans to get out of the Mansion at night and kill Purvi.

Bhuri gives milk to Manas but he refuses to say that she is not giving him chocolate milk and goes to complain to Prakashi.

Pakshi and Anjali plan of killing Purvi while Manas overhears them and thinks to find Purvi before her.

Manas tells Juhi that Prakashi knows where Purvi is and he is going there to save her and tells her a plan in-ear.

The kids hide in the trunk of the car while Prakashi tells the driver to take her to Sakshi mills.

Prakashi and Anjali go inside the mill while the driver notices the trunk open and closes it.

The kids start shouting for help while Juhi consoles Manas.

All the goons gather up and Prakshi tells them to find Purvi while Purvi wakes up and tries to open the window to jump out of it.