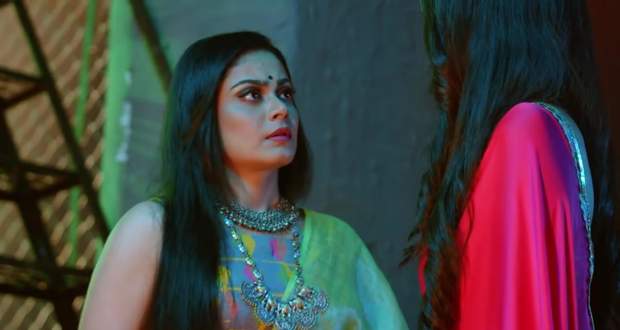 Today's Molkki 30 September 2021 episode starts with Purvi putting the kids to sleep and checking on Sudha who is sitting by the fire.

She further tells her about the lawyer and cries due to being helpless while Sakshi comes there and tells her that she will help her.

Sakshi reveals that she left because of her family's happiness but has been keeping tabs on them ever since she left and that she never paired up with Prakashi and Anjali.

Purvi tells her that she can't trust her but will take her help and informs her about having to arrange 5 lakhs for the lawyer and that she is kicked out of the haveli.

The next morning, Sakshi comes to the haveli while Anjali and Prakshi get shocked to see her.

Sakshi calls out to Purvi and she also comes inside the haveli after which Sakshi reveals to her that the whole property including the haveli is her's.

Prakashi refused saying that the property is of the kid's but Sakshi reveals that she knew of her plan of tricking the kids and then getting the property after which she changed the will and took back all the property.

Meanwhile, Priyashi is hearing everything from upstairs and informs Veer of it who tells her to pack her belongings and meet him in the market.

Further, Sakshi tells Purvi to kick out Anjali and Prakashi after which Purvi throws Anjali out of the house and tells Prakshi to leave herself.

However, as Prakashi is leaving, she gets a heart attack and everyone rushes to her.

© Copyright tellybest.com, 2020, 2021. All Rights Reserved. Unauthorized use and/or duplication of any material from tellybest.com without written permission is strictly prohibited.
Cached Saved on: Friday 28th of January 2022 04:42:44 PM