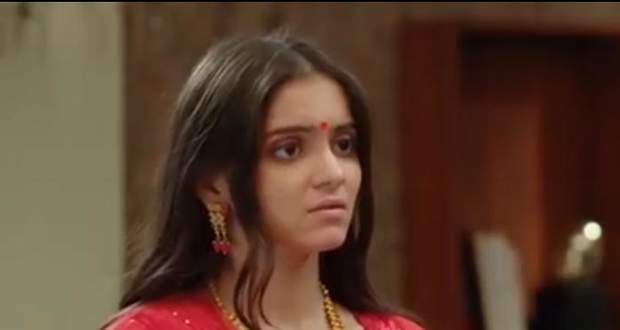 Today's Molkki 31 December 2020 episode starts with Virendra calling Purvi a thief and asks her where is the necklace.

Purvi tells him to say things clearly while he declares that the necklace he put into his cupboard is missing and has been stolen.

Purvi thinks that Anjali has stolen the necklace and agrees with Virendra that the thief should be punished.

Virendra tells the servants to lock all doors and announces that the whole house will be searched starting from the rooms upstairs.

Everyone goes upstairs while Priyashi faints and falls after which Prakashi tells her to rest in her room.

The kids dress up as detectives and search the living room while Priyashi puts pillows under the blanket and takes out a purse from her cupboard and leaves.

The servants don't find anything in the first room after which Virendra tells them to search Purvi's room.

Meanwhile, at a jewellery shop, the jeweller inspects Shakshi's necklace and praises its purity.

The jeweller gives 3.5 lakhs and Priyashi takes it.

Priyashi buys western clothes from some of the money and exits the shop.

Meanwhile, the servants do not find the necklace anywhere.

Anjali suggests Virendra check Priyashi's room and they go there.

Priyashi struggles to climb the rope and manages to reach her room.

Purvi knocks on her door but doesn't get a response after which they enter her room and tell her that they are here to check her room.

The servants do not find the necklace in her room when Anjali points at a bag hidden behind the chair.