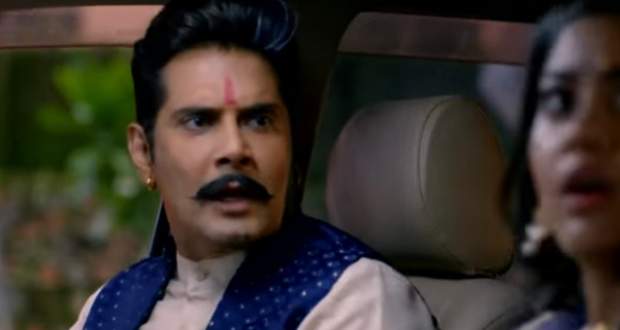 Today's Molkki 4 August 2021 episode starts with Purvi telling Priyashi that she will have to accept in front of everyone her intentions and drags her away.

Elsewhere, Veer thanks Virendra for agreeing to the carriage and they both hug each other while Purvi comes there with Priyashi.

Purvi tells Priyashi to tell the truth but Priyashi does drama in front of them that Purvi wants her to say no to the alliance.

Virendra and Veer question Purvi while she thinks that she cannot reveal the truth to Veer.

Further, Virendra announces that the marriage will happen in two days and tells Veer and Priyashi to leave.

Later, Purvi goes to see Sudha who is crying on the terrace and cries that she will always be a Molkki all her life.

Purvi consoles Sudha and thinks that she will expose Priyashi at any cost. Purvi goes to Virendra and reveals Priyashi's truth but Priyashi comes there and manipulates Virendra by her fake crying.

The next day, Anjali instigates Priyashi as her Haldi ceremony begins.

Anjali is showing Prakashi the recording she made of Veer and Priyashi while Purvi sees it a little bit.

She manages to swap the phone and see the video with Sudha who gets shocked.

© Copyright tellybest.com, 2020, 2021. All Rights Reserved. Unauthorized use and/or duplication of any material from tellybest.com without written permission is strictly prohibited.
Cached Saved on: Wednesday 22nd of September 2021 02:52:25 PM