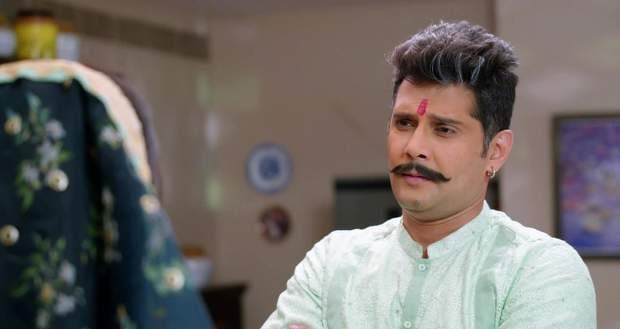 Today's Molkki 4 February 2021 episode starts with Virendra announcing that anyone who has a problem with Purvi taking in the function can leave the house.

He announces that from now on all the Molkki should get all the rights of a wife as they also take responsibility of a wife and gives Purvi the necklace and tells her to complete the ritual.

Prakashi says that Priyashi has to touch Vaibhav's feet but she denies while Purvi makes an excuse that she has back pain.

Virendra says that he has had back pain last night while the ladies misinterpret it and tease Purvi.

Later, Purvi tells Virendra that he should have not talked about having back pain as the ladies teased her the whole time.

She gives him a glass of water but he pushes it away and the glass breaks while the kids watch them and think that they are again fighting.

They leave while Purvi sees them and go after them.

The kids cry and request her to not leave them because of fighting with Virendra while Purvi consoles them.

Virendra heard their conversation from outside and goes to his room while Purvi sees Bhuri going somewhere and wonders why she always goes at night to meet her father.

Later, Anjali gives Vaibhav a plan to run away while Priyashi comes there and taunts her which makes her leave.

Vaibhav threatens Priyashi but she tells him he should be the one worried as she has Virendra's support.

Purvi gives Virendra juice and tells him to not fight or argue with her while Virendra starts coughing and berates her for adding too much ice in the juice.

In the morning, Purvi wakes up Virendra by sprinkling water on him.

He suddenly wakes up and realises that he has lost his voice and writes on a paper that he has to go on a land auction that day.

She offers to become his voice and go to the auction with him and they share a romantic moment when he accidentally addresses 'Meri Bawari'.

© Copyright tellybest.com, 2020, 2021. All Rights Reserved. Unauthorized use and/or duplication of any material from tellybest.com without written permission is strictly prohibited.
Cached Saved on: Sunday 9th of May 2021 11:03:07 PM