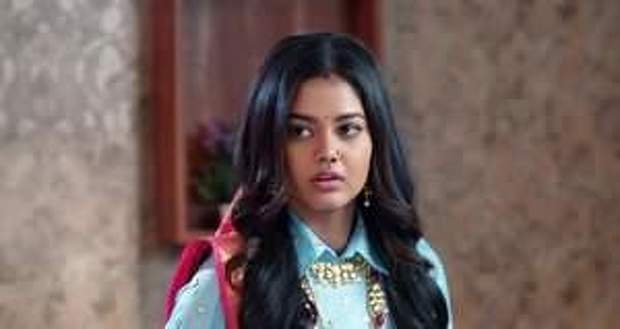 Elsewhere, Vaibhav's friends are asking him where is his special friend and he replies not one but two village girls are after him when both Priyashi and Jyoti come out wearing western clothes.

Priyashi sits in the car and they leave while Jyoti gapes at them going.

Later, Purvi is playing cricket with kids when she sees Virendra and hits the ball here and there while breaking some things.

The ball hits Virendra and he comes there and says that he will teach the kids how to play cricket properly.

Purvi goes inside to bring water for Manas as he is playing with Virendra.

He kisses her while Purvi sees them and shouts at her.

Purvi takes Priyashi to another room where she tells Purvi the truth about her stealing Sakshi's necklace and that she sold it for 3 lakh rupees.

Purvi asks her where is the money while she replies that she hid it outside the balcony for buying luxury things in the future when Purvi suddenly slaps her.

She goes to reveal the truth to Virendra while the ball hits the hidden money and it starts flying everywhere.

Virendra asks to nobody in particular where did it came from and who put it there.

Purvi takes the blame on herself and says that she put the money there while Virendra asks her where she got that much money.

She lies that she stop Sakshi's necklace and sold it while no one believes her.

However, she makes a false story and makes others believe that she was the one who stole it.

Upcoming Molkki episode update: Purvi to be thrown out of the house.