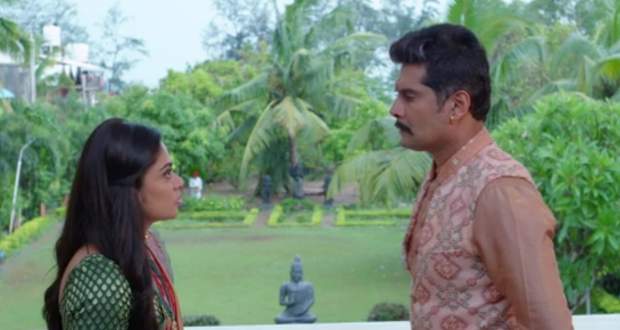 Today's Molkki 4 June 2021 episode starts with everyone insulting Purvi with the name of rituals.

Virendra starts shouting at everyone and Sakshi stops him.

Furious Virendra decides to ban this ritual and calls the villager to ban the insulting ceremony for paid wives.

Afterward, Virendra consoles Purvi and insulted Purvi thank him for banning this type of rituals.

Later, Sakshi rebukes Virendra for supporting Purvi and she also asks him to swear on her whether he is loving Purvi or not.

Further, Virendra reveals to Sakshi that his love towards Purvi is true and Sakshi gets shocked.

On the other hand, Manas and Juhi play with Purvi while Virendra gets irritated and shouts at Manas.

This makes Purvi confused and makes her think about what makes him getting irritated.

Later, by learning Virendra's love for Purvi, Sakshi remembers her happy moments with Virendra and cries.

© Copyright tellybest.com, 2020, 2021. All Rights Reserved. Unauthorized use and/or duplication of any material from tellybest.com without written permission is strictly prohibited.
Cached Saved on: Monday 17th of January 2022 09:32:03 AM