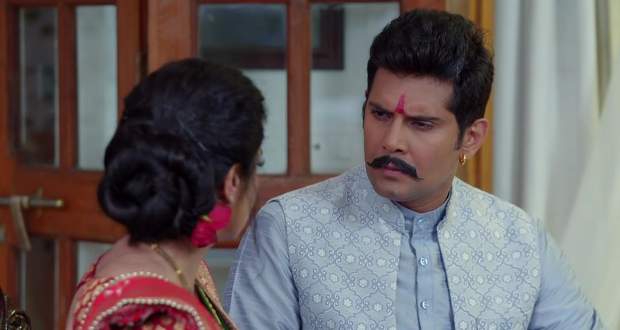 Today's Molkki 4 May 2021 episode starts with Purvi entering the maid's quarters and crying remembering her moments with Virendra and kids.

Bheem comes there and apologises to her while she tells him that she understands his point of view.

Sakshi questions Virendra why he was standing at the mandap and he lies that he was doing the girls Kanyadaan.

Purvi tells the kids how they should behave in fromt of Sakshi and tells them that it is because Sakshi's health is not good.

The kids hug her while Virendra tries to enter but Bhuri stops him.

He asks why Purvi is in maid's quarters and Anjali reveals that it is cause she is a maid in Sakshi's eyes.

Sakshi makes Virendra feed her with his hands while he asks her why she didn't return till now.

Sakshi recalls her deal with Prakashi ans lies to him that she was in come and regained consciousness only a few days back.

Later, Sakshi finds Mangalsutra in their room and questions Virendra about it.