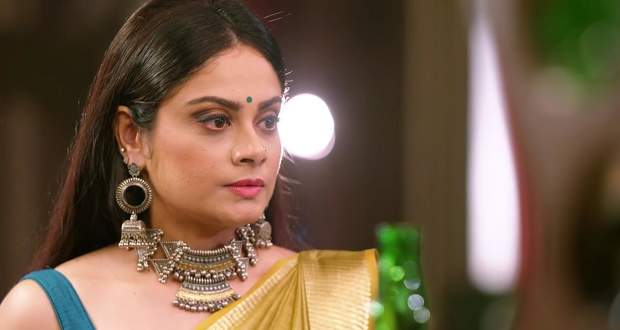 Today's Molkki 4 October 2021 episode starts with Nurse telling Juhi and Manas that the guy is fine and takes them to the police station as they don't know the address of the NGO.

Meanwhile, Sakshi and Purvi reach the police station bit file a complaint but the Inspector suggests waiting for 48 hours.

Just then, the Nurse comes there with the kids who rush to Purvi and gig her as the nurse informs them of the kids helping the guy.

The kids see Sakshi and hug them while Juhi asks if she will stay with them while Sakshi says that she will return once her work is done.

Virendra gets out of the cell and hits the kids while telling them to inform someone before going anywhere.

Sakshi takes the kids outside while Virendra tells Purvi to the kids under her custody.

At NGO, the kids apologize to Sudha and the staff of the NGO after which Purvi informs her that she is taking them back to haveli.

However, Sudha refuses to come with them and says that she will make a name for herself and will stay in the NGO.

Purvi, Sakshi, and the kids return home while Anjali acts of taking care of Prakashi.

Prakashi tells Anjali to find out how to break Sakshi and Purvi’s friendship.

The next morning, Purvi and Sakshi meet lawyers but they refuse to take up the case making them worry as the date nears.

The peon overhears them and gives them the visiting card of a lawyer saying that he might be able to help them.

Sakshi and Purvi go to that lawyer's house but Purvi gets a call from Manas and excuses herself while Sakshi goes inside.

Sakshi sees the lawyer Arjun Bajwa drinking as she introduces herself.

However, he calls her a made making her furious after which she reprimands him and tells her what she heard about him.

He tells her that it is all true and refuses to fight Virendra's case and tells her to leave.

© Copyright tellybest.com, 2020, 2021. All Rights Reserved. Unauthorized use and/or duplication of any material from tellybest.com without written permission is strictly prohibited.
Cached Saved on: Thursday 2nd of December 2021 12:07:23 AMCached Disp on: Monday 6th of December 2021 08:33:24 AM