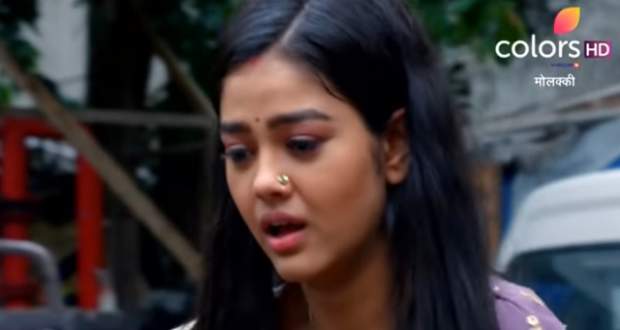 Priyashi refuses and Purvi decides to go to Panchayat to show the recording to Virendra.

Priyashi goes to Anjali and confronts her while Anjali puts the blame on Prakashi and says that they need to stop Purvi.

Purvi reaches the Panchayat but finds out that Virendra left for home and goes back when she gets shocked to see Aarav with Charansingh.

Elsewhere, Anjali lies to Virendra and sends him to bring things from temple while Purvi enters the haveli.

Priyashi snatches the phone from Purvi and destroys it saying no one can stop the wedding.

Virendra comes there and asks Purvi why she's crying and she tells him the truth but he doesn't believe her.

They go to Veer and ask him the reason for marriage while he says that it's because he loves Priyashi.

Virendra scolds Purvi and warns her to not interfere in the wedding.

Priyashi thanks Veer whole he confesses that he loves her and she feels glad that no one can stop the wedding anymore.

Purvi sees Aarav and confronts him about seeing him with Aarav but stops seeing Nandini coming there.

Later, Purvi gets ready as a bride while Purvi tells Sudha something in silence.

© Copyright tellybest.com, 2020, 2021. All Rights Reserved. Unauthorized use and/or duplication of any material from tellybest.com without written permission is strictly prohibited.
Cached Saved on: Wednesday 17th of August 2022 04:09:15 PM