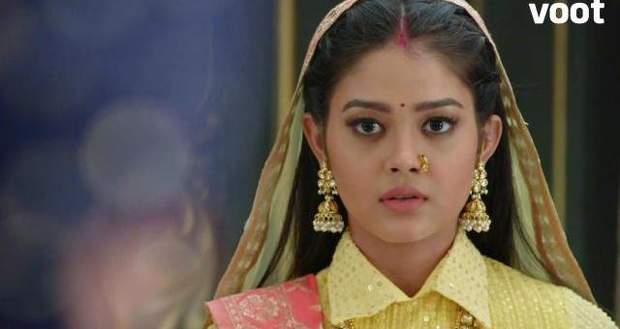 The bidding starts while Purvi sees Churasiya and realises that it is the same man who was talking about a land scam and came to meet Vaibhav.

She does as Virendra says but gets tensed when the price increase and she keeps telling Virendra to not place the bid but he does so anyway.

She stops voicing the bid upon seeing the price of 1.1 crore which makes Virendra lose the land.

Virendra tells Purvi that he made a mistake by making her his voice and goes while Purvi follows him.

At home, Purvi is making kadha while a servant comes there. They talk while Purvi gets informed that Bhuri's father has died long ago and wonders why Bhuri lied to her.

Purvi tells Virendra that her inner voice told her that the land was going to be a loss for him.

Suddenly, she hugs him and he says that he still won't forgive her when she reveals that Manas is watching them standing at the door a few which Virendra puts his arms around Purvi.

Manas goes after which Virendra tells her that he is still angry at him which angers Purvi and she goes saying that he will realise one day that had was right.

She tells him that she is going to teach the kids for the drama and requests him to help her but he refuses.

The kids notice Virendra and convince him to do the practice and get him to say I love you to Purvi.

The news channel on television shows Chirasiya and the winner getting dragged by police who state that they are arrest for buying and selling government land.

Elsewhere, Vaibhav talks to the receptionist while he gets a call and goes.

Churasiya's goons tell him that Churasiya had to go to jail because of him while Vaibhav tells him to take revenge from Abhi.

However, Vaibhav tells him to take revenge from Virendra as he is on their side while Priyashi hears him and gets tense.

© Copyright tellybest.com, 2020, 2021. All Rights Reserved. Unauthorized use and/or duplication of any material from tellybest.com without written permission is strictly prohibited.
Cached Saved on: Tuesday 28th of September 2021 06:03:30 AM