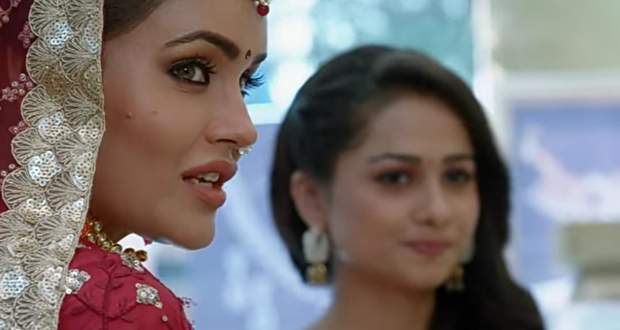 Today's Molkki 5 January 2021 episode starts with Virendra berating Purvi and ordering her to collect the money.

He takes her hand and drags her out of the house and demands her to take the money and bring back Sakshi's necklace.

He warns her that if she is not able to get the necklace, then the doors of this house are closed for her.

Anjali forms a plan to keep her out of the house.

Meanwhile, the kids are crying for Purvi while Virendra comes there and remembers Purvi's words on self-esteem.

Bheem wonders who's blame did Purvi take on herself while kids overhear them and plan to find the real culprit.

Elsewhere, Priyashi tells Purvi the address of the jeweller she sold the necklace to and informs her that 10 thousand are missing from the money.

Purvi tells her to bring the 10 thousand she got as a salary for teaching the kids from her cupboard while Anjali is at the jewellery store holding Sakshi's necklace.

She gives the jeweller money and tells him to melt the necklace and that he can keep both the money and the gold.

The kids find the 10 thousand rupees bill from Priyashi's room but throw it there thinking that it is not useful.

Purvi reaches the jewellery shop but gets disheartened upon learning that the necklace has been melted into gold.

She returns home and says that she will have to leave as she could not get back the necklace while the kids hug her and request her to not leave.

Bheem and kids beg Virendra to not let Purvi go but Purvi says that she must be punished.

© Copyright tellybest.com, 2020, 2021. All Rights Reserved. Unauthorized use and/or duplication of any material from tellybest.com without written permission is strictly prohibited.
Cached Saved on: Sunday 17th of January 2021 07:39:36 AM