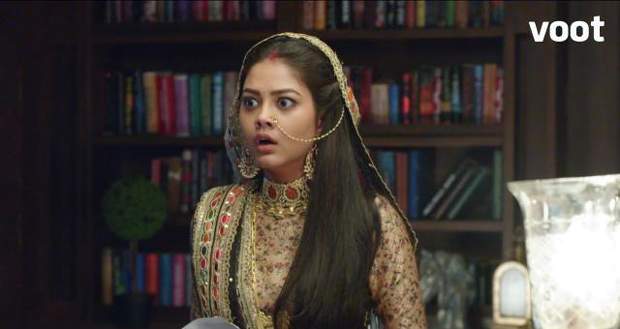 Today's Molkki 5 March 2021 episode starts with Purvi searching in Bhuri's room while Bhuri realised that she forgot vegetables in her room and goes back.

She tries to leave stealthily but fails as her phone starts ringing and she gets caught.

Bhuri confronts her while Purvi shows her the ring.

Purvi reveals what she saw while Virendra asks Bhuri if she stole the ring.

Anjali comes forward and says that the ring is hers and she gave it to her to get it polished.

Anjali says that Purvi has been overstressed and has started hallucinating while showing Prakashi the ring and telling her that it is the same ring that she liked end wanted to make the same one was her and she agrees.

Anjali and Bhuri give Purvi a pointed look while Purvi gets certain that something is going on.

Later, Anjali and Bhuri go to the abandoned palace where Virendra and Purvi's pictures are hanging on the wall.

A lady is looking at the pictures while Anjali compliments her saying that she saved them.

The lady turns out to be Prakashi and she turned the pictures one by one while saying that she will ruin Virendra and his Molkki's life slowly.

She recalls the last while saying that she will slowly and steadily ruin Virendra and Purvi's life as to make them head tears of blood.

Elsewhere, Virendra gets a call after which he goes to the college with Purvi.

The principal apologises to Purvi and says that they have catches the real culprit while Virendra thinks that Karan is the culprit and grabs him by his collar.

However, the principal stops him and says that he is not the culprit while a guy comes there who is the real culprit.

Virendra and Karan beat the guy after which the guy reveals that Purvi rejected a dance with him and slapped him so he wanted revenge.

Virendra asks Karan how he found the culprit while Karan reveals that he took the students in confidence and found out that Gaurav is the culprit.

Virendra and Purvi are about to leave while she goes back and shows her gratitude to Karan while Virendra looks on.

© Copyright tellybest.com, 2020, 2021. All Rights Reserved. Unauthorized use and/or duplication of any material from tellybest.com without written permission is strictly prohibited.
Cached Saved on: Saturday 31st of July 2021 02:28:53 AM