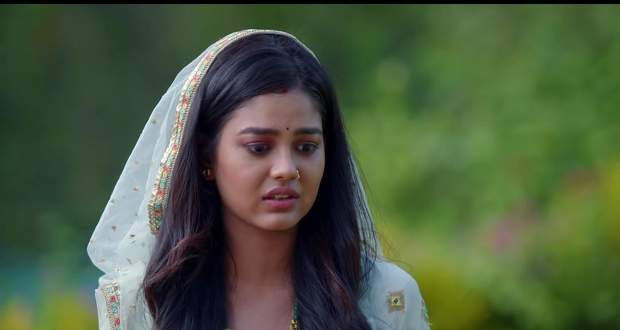 Today's Molkki 5 May 2021 episode starts with Sakshi questioning Virendra about the Mangalsutra while Juhi manages to save the situation by lying.

At night, Purvi and Virendra remember their moments with each other and he leaves Sakshi to meet her.

Purvi wipes her tears and gets shocked seeing Virendra.

He asks her if he can come inside and she says that everything is his.

Meanwhile, an awake Sakshi wonders where is Virendra.

Virendra tells Purvi his conflict between watching to be with her and having to stay with Sakshi while Purvi responds that Sakshi's health is of the utmost importance at the moment.

Elsewhere, Sakshi looks for Virendra around the Haveli.

Sakshi sees Virendra coming from servants' quarters and questions him.

Purvi lies to her and manages to convince her after which he leaves with Sakshi.

Sakshi sees the kids bonding with Purvi and tells her that only she will take care of them from now on.

Purvi questions Sakshi why she hid the truth from Virendra about her past while Sakshi requests her to not say anything remembering Prakashi's threat.

Upcoming Molki episode update: Sakshi to get suspicious of Virendra and Purvi.