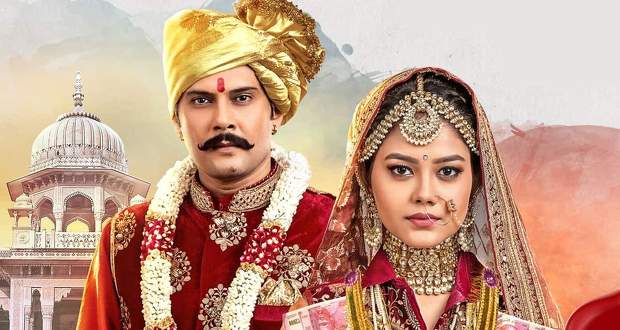 Today's Molkki 6 April 2021 episode starts with Kids asking Purvi her location while she gets emotional seeing them.

They ask about each other after which Purvi assures them that she will come home soon and to not inform anybody about her call.

Anjali is headed towards the kids' room while a servant comes there and distracts her.

Juhi and Manas complain about Anjali to Purvi and she asks him about Virendra while they reveal that he is out of town for work.

She heard goons and cuts the call after telling them to stay near the laptop in the evening as she will again call.

Anjali opens the door to see the kids praying on their beds with the laptop closed.

Meanwhile, Purvi is also pretending to sleep while the goons are roaming around the room.

Anjali questions kids after which they blackmail her to tell them a nighttime story or else they will complain about her to Bheem.

Anjali manages to get Jyoti to tell them a story while the kids order Anjali to make a milkshake for them.

The next morning, Anjali brings food for the kids but they say that they want sandwiches and blackmail her into making them.

Kids scream at Anjali to wake her up and make her do all their work while dressing them up.

The kids leave for school while Prakashi tells Anjali that she is going to a Baba who cures broken bones and illnesses with their touch and leaves.

Anjali plans to get revenge from Purvi by stealing her jewellery and tells Jyoti her plan that they will leave and will come back in disguise so that no one gets suspicious of them.

Later, Manas comes back home due to a high fever while Juhi is still at school. Manas notices two people in back outfits trespassing the house gates through his binoculars.

He tried to shout to people for help but his efforts fo in vain after which he calls Purvi and informs her about the thieves.
Purvi gives him a plan and they end the call.

Elsewhere, Juhi gets worried for Manas and goes back home by doing the drama of being ill.

Manas is keeping an eye on the goons with the help of the drone while Purvi is on the calm with him.

They notice the goons going to Purvi's room and searching for something.