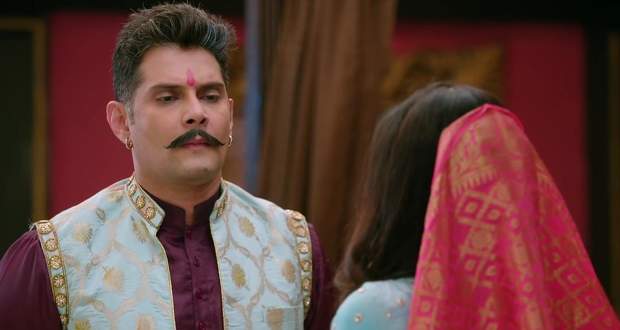 Today's Molkki 6 January 2021 episode starts with Purvi telling everyone that she needs to take her Lord Krishna before she leaves and goes to take it while the kids request Virendra to stop her from going.

Purvi remembers her moments with Virendra and the kids and prays to Lord Krishna that she did not want to leave the mansion with the blame of being a thief.

At the same time, Virendra comes there and shows her the ten thousand rupees bill named to Priyashi telling her that he knows everything.

She begs him to not kick Priyashi out of the house while he informs her that the kids brought the bill to him and revealed the real culprit.

Virendra tells her to not take everyone's blame on herself and shows her the necklace while revealing to her that he got the necklace back from the jeweller.

Later, Purvi goes to Priyashi's room and tells her to leave the mansion while packing her things.

However, Vaibhav comes there tells her that Priyashi will stay in the house as his guest.

Priyashi chooses to side with Vaibhav's request and says that she will stay as his guest which shocks Purvi.

Later, Virendra asks everyone why they are not eating and says that maybe they don't want to eat sweets made by Purvi.

Purvi is about to go to sleep while Virendra gives her the salary for teaching the kids.

She opens the envelope and is stunned to see more money while Virendra reveals it to her that he has doubled her salary.

Upcoming Molkki episode update: Purvi is informed that Sakshi's spirit is in the mansion.