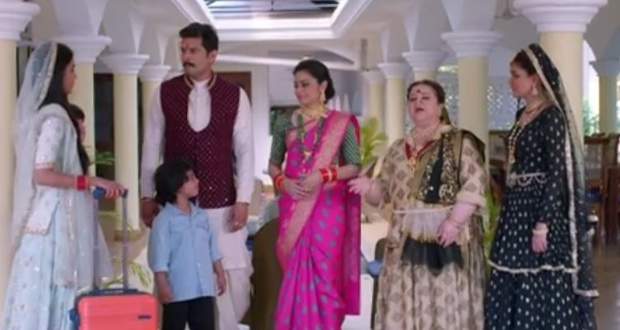 Today's Molkki 6 May 2021 episode starts with Prakashi suggesting Virendra go with Sakshi on a second honeymoon to help her get better.

He refuses to do so but Purvi overhears them and convinces him to agree to Prakashi's request with a sad face.

Prakashi goes to do the booking of the hotel. Virendra asks Purvi what she is doing but she leaves without saying anything.

The kids say that they want to go with them too and Sakshi agree.

Manas says that Purvi will pack their bags as she knows everything which shocks Sakshi.

Later, the kids request Purvi to come along but she refuses while Sakshi gets envious seeing her take care of her family.

She thinks to make the family hers again.

The kids go to Virendra and tell him a plan to convince Purvi to come and he agrees.

Virendra and Sakshi are about to leave for the hotel bit the kids stop saying that they won't go until Purvi comes with them.

Sakshi and Virendra also agree and they all leave while Prakashi fumes in anger.

At the hotel, Sakshi behaves with Purvi thinking of her as a maid which Virendra doesn't like.

Sakshi decorates the room for Virendra and hugs him while he stands tense.