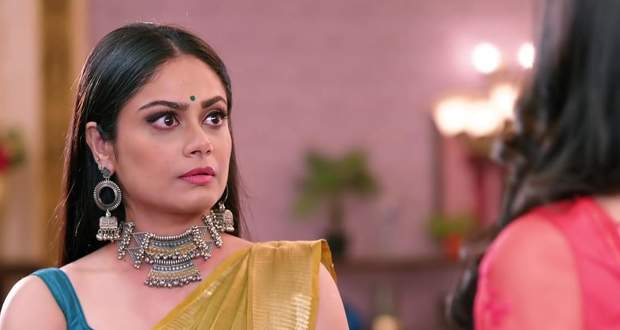 Today's Molkki 6 October 2021 episode starts with Arjun coming to the haveli with the kids and informing them that he is ready to fight them while the kids inform Purvi that he is the same person whom they saved the other day.

The kids go upstairs after which Arjun tells Purvi to retell the events of the night when the shooting happened after which he tells that he has to meet Virendra.

Further, he tells Sakshi to not come as her face irritates him, and he leaves with Purvi.

At the cell, Virendra tells him his side of the story and that he only wanted to shoot him on the shoulder.

Further, Arjun instigates him and gives him a gun to shoot at the moving paperweight in his hands and Virendra accurately hits the paperweight proving that he did not kill Daksh but someone else in the room had a gun and shot Daksh.

Arjun and Purvi reach the hotel room where Daksh was killed and he further tells her to reenact what happened that night while getting emotional.

He tells her to show him where she was lying and she lies on the bed while je goes on top of her making her uncomfortable.

Elsewhere, Prakashi questions a servant what Sakshi and Purvi we're talking about while the servant tells her that Purvi left with someone in the morning.

Meanwhile, Arjun tells Purvi that he is not interested in her and only wants to know their position.

He further calls in a recent and tells Purvi to tell him where Virendra was standing.