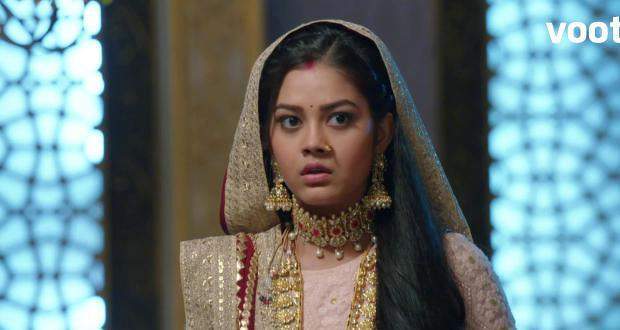 Today's Molkki 8 February 2021 episode starts with Purvi telling the servant to pit the mattress beside the bed while Virendra asks her what is it.

She tells him that use bought an orthopedic mattress for him from an online app.

He asks her how she knew about the land being fraud while she reveals that she overhead the broker the earlier day.

Virendra shows his gratitude to her which she says that he will have to get her something as a thank you.

Priyashi calls Purvi and warns her that she overheard Vaibhav talking about taking revenge on Virendra.

The next morning, Virendra praises the kids' costumes while Bheem comes there and reminds him that he has to go to the Panchayat.

Purvi tells him to give her the gift by coming to the kid's school for the play.

Later, other kids at the school tease Juhi and Manas by saying that their parents won't come while Virendra notices three goon like people.

Manas gets into a fight with the other student while a teacher calls Purvi and tells her to come to the school as Manas is upset.

Elsewhere, the goons pit a cloth of Virendra's head and best him while Purvi calls him.

The goons break his phone and hit his head with an iron rod.

A man sees Virendra unconscious and tries to wake him up.

The driver tells Purvi that the car's radiator has broken and will take some time.

Suddenly, the man comes there with Virendra on a two-wheeler and Purvi goes with him to the hospital.

Elsewhere, Priyashi asks Vaibhav whom he was talking to while he denies everything and tells her to stay away from him.

The kid's turn comes but they stay still on the stage while Purvi comes with her one hand supporting Virendra while the kids get happy seeing them.

© Copyright tellybest.com, 2020, 2021. All Rights Reserved. Unauthorized use and/or duplication of any material from tellybest.com without written permission is strictly prohibited.
Cached Saved on: Wednesday 22nd of September 2021 07:19:26 AM