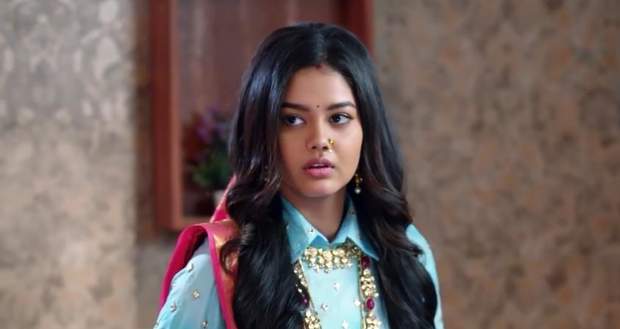 Today's Molkki 8 January 2021 episode starts with Vaibhav putting his arms around Priyashi while asking her if she would stay with him for one night.

She says that only after their marriage and goes while Vaibhav's friends make fun of him.

Vaibhav says that Priyashi will be in his bed by hook or by crook while Purvi hears him and gets tensed.

They reach the guest house and kids ask Purvi what game they should play. Purvi forms a plan and tells the kids to bring Priyashi as she knows many games.

Kids and Purvi convince the whole family to play with them including Virendra.

Vaibhav is the first one to be blindfolded and he goes towards Priyashi but Purvi comes between them and outs herself instead.

She puts the blindfold on her eyes and plays while the kids form a plan and get Virendra outed by Purvi.

Purvi pushes Manas towards Virendra to get them closer after which Manas puts on the blindfold and tries to catch others.

Purvi gets worried after not seeing Priyashi and Vaibhav playing with them and goes inside to look for them.

Meanwhile, Jyoti comes outside wearing a short dress while everyone watches her.

Prakashi scolds her and tells Anjali to get her changed.

Elsewhere, Purvi finds Priyashi's shoe near the stairs and hears her call put to her.