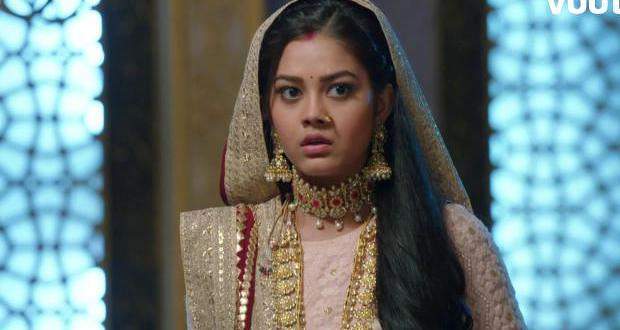 Today's Molkki 8 March 2021 episode starts with Purvi thanking Karan to help her and talks to him while Virendra looks on.

Later, Karan reveals his true plan of getting revenge on Purvi by becoming her friend and then humiliating her in front of everyone to his friends.

Meanwhile, Purvi has made kheer while Manas brings Virendra there.

She tells him to eat the kheer while he remembers her talking to Karan and tells her to give the Kheer to Karan.

She says that she will give it to him later but first wants to feed him and feeds him with her own hands.

Purvi is going to her room while she stumbles upon Bhuri and asks her if she is okay as she is looking worried.

Purvi sees Bhuri talking about something to Anjali but isn't able to see them.

Later, Purvi reaches the college with Virendra but she tells him to buy her a pen from the shop across the street.

She notices some girls fawning over Virendra and gets jealous.

He comes out and she starts venting her frustration at Virendra while he asks her if she is getting jealous.

Later, Purvi sees Anjali and Bhuri going somewhere and follows them while the medicines fall from Bhuri's hands.

Anjali is picking up the medicines while Purvi realises that Anjali knows about Bhuri's lies.

She follows them towards the abandoned palace and clicks a picture of them before going inside.

She accidentally keeps the flashlight of her phone on which Anjali notices and manages to escape from them.

Anjali reaches Prakashi and tells her that Purvi followed her and Bhuri while revealing that the captive again tried to escape.

Prakashi says that they have to manage the Purvi situation as she knows about them and might tell Virendra about it.

Purvi reaches home while Juhi takes her on the roof where everyone is having a party.

She sees Anjali there and gets confused while Virendra sees Karan talking to the security guard.