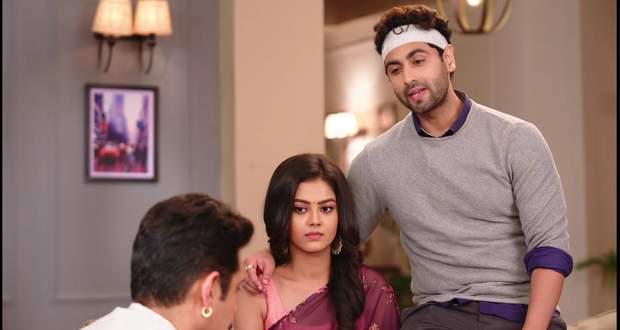 Today's Molkki 8 September 2021 episode starts with Virendra congratulating Daksh and Purvi and getting emotional while they leave.

Elsewhere, Nani, Chandni, and Dhwani are shopping for the wedding while the kids get upset seeing it and complain about it to Virendra.

Virendra meets up with the doctor and asks him if there is any way to make Dhwani remember her past.

The doctor informs him that they can take Purvi to the place where she used to live so that she can stay with the same people.

Later, Nani goes to attend a call while Purvi asks Manas why he hid her earring and he replies that he doesn't want her to marry Daksh.

She chases him around the table and is about to fall but Virendra manages to catch her and they share an eye lock.

Further, Virendra informs Daksh that the work in his mill in Rewari is going to start and that he should be there in the initial 15 days so that the factory runs smoothly.

Daksh gets worried and wonders how to handle both the factory and marriage together while Virendra suggests getting married in Rewari to solve his problem.

Nani intervenes and refuses but Virendra manages to convince her too and makes them agree on the idea.

He leaves for Rewari and tells them that they can come the next day.

Further, at Rewari, Virendra comes to the haveli and reveals to his family that Purvi is alive and that she is coming the next day.

He also informs them to not call her by her name and to act like they are meeting for the first time.