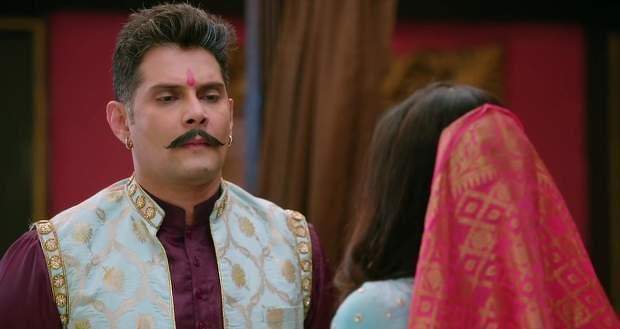 Virendra tells them to do the play.

Later, the host announces Juhi and Manas as winners and tells the Principal to give them the trophy.

Meanwhile, Priyashi manages to free herself from Vaibhav's hold and locks herself in in bathroom while he throws the vase towards her.

Manas goes to the boy whom he fought with and tells him that his parents are here.

However, the kid's mother rebukes him and Purvi by saying that Purvi is a Molkki and can be his mother while Virendra goes to her and starts scolding her for bringing another woman down.

Purvi and Virendra he says that he wonders who was behind the attack while Purvi tells him that she suspects Vaibhav and tells him about Priyashi's call.

Elsewhere, Purvi tries to get out seeing Vaibhav passed out but against hides in the storeroom when Vaibhavbtries to catch her.

The kids threaten Virendra and Purvi that they will trouble everyone if they do not let them sleep with them.

Vaibav enters the now open storeroom when Priyashi pulls the rope and the paint falls on Vaibhav from the bucket tied above.

He winces in pain and removes his clothes while Priyashi takes the dirty clothes and locks him in the storeroom.

She packs Vaibhav's everything and leaves while Vaibhav manages to get out of the storeroom and gets angry seeing his belongings missing.