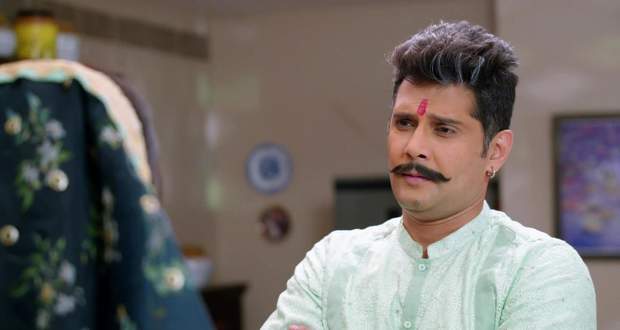 Today's Molkki 9 July 2021 episode starts with Virendra rebuking Anjali and Prakashi and trying to kick them out but Nandini stops her.

She tells him that she and Veer will be legal guardians of Manas and Juhi until they turn 18 and that Anjali and Prakashi will stay with them.

Virendra tries to tell them about Prakashi's intentions but Nandini ignores him and tells him and Purvi to leave.

However, Prakashi stops them and tells them that they can stay there under one condition and that they will have to stay in the servant's quarters.

Virendra is about to refuse but Purvi manages to convince him saying that they have to stay near them to expose Prakashi and Anjali to the kids.

Later, Virendra and Purvi clean the room and share romantic moments while Veer and Nandini get upset seeing Sakshi's room.

Virendra sees Nandini and gets upset while Purvi encourages him saying that they will win the hearts of Nandini and Veer with love.

The next day, Sudha sees Veer feeding a beggar and gets happy as her friends praise him saying he has a big heart.

Meanwhile, Nandini tells Purvi to iron her clothes and to be careful with them as she wants to wear a red dress.

However, Anjali lies to Purvi and makes her go to the kitchen while she ruins Nandini's red dress.

Nandini shouts at Purvi for ruining her dress and is about to hit her when Virendra stops her.

© Copyright tellybest.com, 2020, 2021. All Rights Reserved. Unauthorized use and/or duplication of any material from tellybest.com without written permission is strictly prohibited.
Cached Saved on: Tuesday 2nd of August 2022 12:53:36 PMCached Disp on: Thursday 11th of August 2022 04:34:09 AM