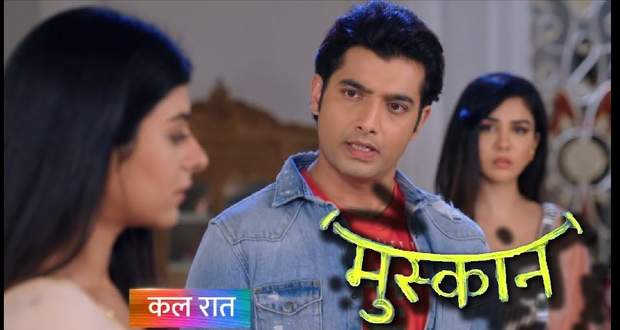 Today's Muskaan 25 May episode starts with Sriji. He is infuriated on Muskaan and Rohan. Tara talks to him in Chess language and suggests a way out. Sriji understands Tara’s signal.

Here, Rohan accompanies Muskaan to the college. Muskaan says she can help in earning money by teaching children. Rohan says he would arrange for the place.

Rohan and Hanumaan arrange for kids and coaching place. Muskaan gets surprised to see the coaching arrangements.

Sriji starts his drama once again in front of Gayatri. He forced Gayatri to come along, but Muskan and Rohan come on time and stop Sriji.

Sriji starts asking Rohan where he would get money for food and shelter. Muskaan hands over the coaching money to Gayatri.

Gayatri bashes Sriji for making unnecessary efforts. She asks Deependra and Bunty to return the vehicles, but they deny. They express their wish to go with Sriji. Bunty advises Bua to come along, but Bua denies.

The written update of 25 May 2019 Muskaan episode full story ends.

© Copyright tellybest.com, 2020, 2021. All Rights Reserved. Unauthorized use and/or duplication of any material from tellybest.com without written permission is strictly prohibited.
Cached Saved on: Monday 6th of December 2021 05:20:19 PM