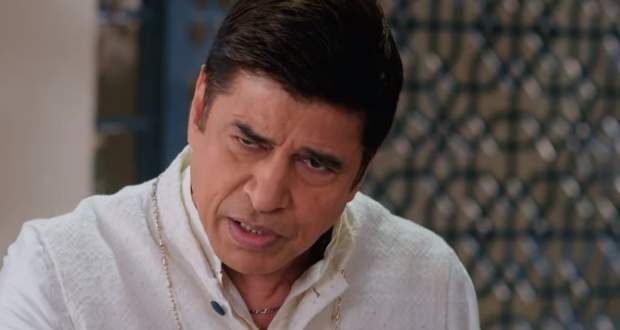 Roshni wishes to play music and starts dancing. Gayatri asks her to not to dance and eat something. Roshni is adamant to dance and plays the music again.

Meanwhile, Khushi complaints against Roshni to Muskaan and doesn’t want to live with her. Muskaan consoles Khushi in keeping Roshni as her sister and transform her.

Sir Ji arrives at Ronak’s house and Roshni greets him. He wants Gayatri to touch his feet and put Sindoor in her forehead.

Ronak rebukes Sir Ji and refuses to accept him as her father. He wants him to leave the house while Roshni says she will also leave if her Babuji leaves.

Bapuji wishes to send Roshni to school and sends a message before leaving. Muskaan is with another guy in the photo and Ronak gets angry.

He tries to spoil Muskaan’s name while Ronak is about to leave to attack Sir Ji. Roshni hears this and leaves the house and follows Babuji.

Ronak tries to make Roshni understand that Babuji had taken her from the hospital. Nisha arrives and consoles Roshni in staying with her.

Rani’s mother also manipulates Roshni against Khushi. She wants her to trap Khushi and make Ronak scold her.

© Copyright tellybest.com, 2020, 2021. All Rights Reserved. Unauthorized use and/or duplication of any material from tellybest.com without written permission is strictly prohibited.
Cached Saved on: Monday 6th of December 2021 05:40:32 PM