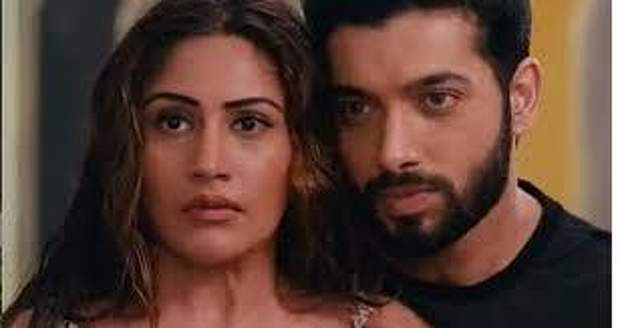 Today's Naagin 5 13 December 2020 episode starts with everyone looking for Meera in the jungle. Shukla asks Jai to concentrate on his plan to steal Bani’s superpowers.

Meera stands at the top of the cliff and warns everyone not to come close to her. Tapish requests her to not to jump off the cliff and confesses his love for her.

The god of the sea arrives there and reveals that Meera is his daughter Vaaridhi, the princess of the sea.

Bani tells Meera to take the right decision of her life, while the God of the sea asks Meera to join him and to become a part of the sea.

Meera chooses her present life and refuses to go along with the God of the sea. She confesses her love for Tapish and everyone gets emotional on learning about her decision.

The next morning, Veer questions Bani if she is forced into their marriage. Bani answers him indirectly and asks him to decode the answer by himself.

Further, Bani decorates a room to give a surprise to Veer but she finds Jai at that place.

He tells Bani that he feels bad about knowing that she is in love with someone else, while Veer overhears their conversation and gets confused about Bani’s feelings for him.

Later, Veer rudely talks to Bani, while Meera’s Mehndi function begins and everyone enjoys it together.

Bani imprints Veer’s name initially on her hand with the Mehndi, while Balwant tells Veer that he wants Chandrakala to die soon otherwise she would create trouble for everyone.

Maarkat waits to get one vision of the moon to get her powers back. Meanwhile, Veer tells Bani that he got surprised to see Jai with her at his place.

Bani couldn’t understand the reason for Veer’s rudeness. Veer’s brother takes him away to dance on the occasion of Tapish’s wedding.

On the other hand, Maarkat executes her plan to take help from the moon. She wants someone to witness the moon, while unfortunately gets hypnotized by the moon.

Bani apologises to Veer for her mistake but he behaves very rudely with her. He pushes Bani and says that she deserves to be at his feet.

Bani gets shocked to witness Veer’s weird behaviour. Jai gets angry with Veer for hurting Bani, while Veer warns him that he will throw him out of the house.

Upcoming Nagin 5 episode update: Veer and Bani get into an argument.

© Copyright tellybest.com, 2020, 2021. All Rights Reserved. Unauthorized use and/or duplication of any material from tellybest.com without written permission is strictly prohibited.
Cached Saved on: Saturday 23rd of January 2021 02:45:15 AM