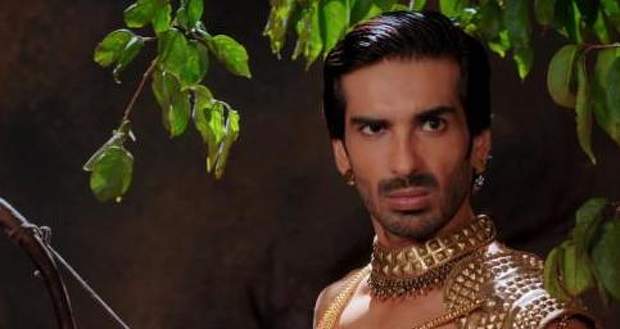 Today's Naagin 5 16 January 2021 episode starts with Bani revealing to Tapish and Meera that Veer forgot her because she changed history by marrying a Cheel and falling in love with him instead of taking her revenge from them.

Elsewhere, Daksh and Ponky convince Veer to go to a club to party with them.

Later, Jai is talking to Daksh and Ponky on the call that their plan will become successful.

Everyone is talking while the delivery of a big box comes for Veer.

Bani thinks that it is a trap of Farishta and tells Veer to not open the box.

Veer pushes her away and he opens the box while Meera holds back Bani from stopping him.

Suddenly, smoke starts coming from the box while Bani feels relieved that Veer didn't get hurt.

Veer starts loudly telling her that she is a stalker and tells her that he doesn't like her.

Later, Balwant tells her that he wants her to stay in the house while she says that the punishment for his sins won't be less because he accepts her.

Bani comes back home and gets shocked seeing a blood trail and follows it while Farishta appears.

They reach the balcony where she sees Veer's brother and Farishta asks Bani why she is saving others.

She kills Veer's brother while the Farishta tells her that Veer's time will also come and disappears.

Meanwhile, Jai is talking to a girl named Monica who tells him that she charges 1 crore for a married man.

Veer reaches the party where Monica flirts with him but he remembers Bani crying and starts drinking.

Veer dances with her while Bani comes there.

Monica keeps making him drink while he thinks that Monica is Bani and talks to her.

Jai gives a bottle filled with something to Ponky and Daksh and tells them to mix it in Veer's drink.

He reveals to them that Monica will sleep with Veer while he will make a video of them.

Jai noticed Bani and hides behind Daksh and Ponky while she pushes Monica away from Veer and dances with him.

Bani tells them that he belongs to her while he suddenly pushes her away.

© Copyright tellybest.com, 2020, 2021. All Rights Reserved. Unauthorized use and/or duplication of any material from tellybest.com without written permission is strictly prohibited.
Cached Saved on: Tuesday 2nd of March 2021 03:08:57 PMCached Disp on: Friday 5th of March 2021 09:19:28 PM