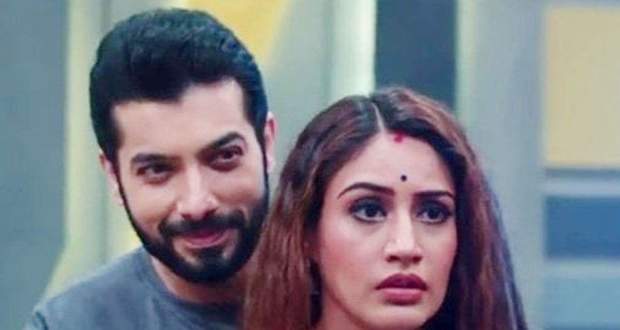 Today's Naagin 5 17 January 2021 episode starts with Bani hugging Veer and dancing with him.

Jai tells Daksh that he has to do his work and mixes the liquid in the small bottle into a drink.

Veer pushes Bani away and drinks the spiked drink.

He dances with Monica while Bani bumps into Jai who tries to incite her against Veer.

Monica takes Veer to his room and goes to the restroom to change.

Jai tells Bani to check the rooms while thinking that his plan worked.

He goes to the window of the room where Veer is and gets shocked to see Bani and Veer together.

He leaves while Veer suddenly pushes away Bani and tells her that he hates her and she cries.

He tells her to not cry while she asks him why he is bothered by her tears.

She gets hurt and he tends to her wounds while the Farishta comes there amd hypnotises everyone.

He goes upstairs to Veer and Bani while Jai looks on.

Bani and Veer appear in a garden.

Farishta comes there and tells her to step out of his way so that he can take the revenge she never could.

He attacks her and binds her in a magical trap.

He tortures Veer while Bani requests Lord Shiva to help her save Veer.

She is released from the magic and hits Farishta with an iron rod.

She apologises to him and tells him to take her life instead of Veer while Veer wakes up and goes from there ignoring Bani.

Bani calls Jai and goes while Farishta thinks to himself that the story has truly changed due to Veer-Bani's love.

Daksh calls Jai and tells him that Sampere Baba came to their house and is at the front.

She sees Farishta struggling to climb the stairs and helps him.

She tries to heal his wound but fails as he falls and praises her love for Veer.

He apologises to her for separating her and Veer and says that he can't take back the curse he put on Veer.

He tells her that he needs to reach the fairyland while she tells him to do something for Veer.

© Copyright tellybest.com, 2020, 2021. All Rights Reserved. Unauthorized use and/or duplication of any material from tellybest.com without written permission is strictly prohibited.
Cached Saved on: Tuesday 9th of March 2021 02:45:01 AM