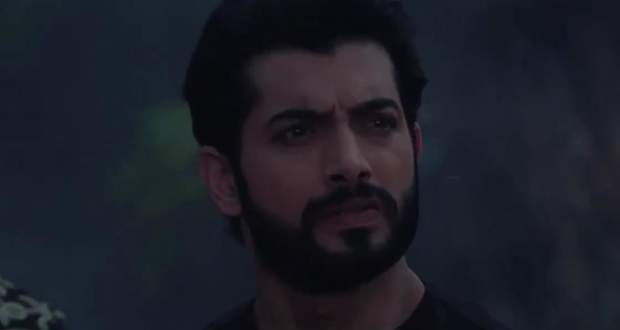 Today's Naagin 5 20 December 2020 episode starts with Veer telling Bani that his love for her was fake and goes away while Bani feels heartbroken.

Bani reveals her emotions to Meera and reminisces her moments with Veer.

Bani tells the family that there is something wrong with Veer to which Tapish suggests that they should seek advice from Vikach, a ghost who knows everything about past, present, and future.

Bani, Meera, Tapish, and Jay reach the Tilasmi Cave where Bani desperately requests Vikach to show himself and guide them.

Meanwhile, a female voice calls to Veer and tells him to come to her.

Vikach addresses Bani as Naageshwari and questions her why she married Veer, a Cheel. He tells her to think about it.

Veer gets in his Cheel form and flies to Moon while Balwant goes after him but gets left behind.

He sees a girl who asks him if he remembers her but he denies to which she sings a song and addresses herself as a princess of the sky.

Veer calls her Chandni while dancing with her.

Elsewhere, Bani gets a package and opens it to sees pictures of Veer with his eyes black. She concludes that Veer was not himself the previous and the present.

Chandni takes Veer to Kaamna Mehal and tells him that all his wishes will be completed here.

Bani tells Jay that she is sure of Veer being on the moon but he questions her what if Veer doesn't come back.

Chandni takes Veer to the bar area and gets on her knees asking Veer to marry her. He happily agrees and asks her when is the wedding.

Maarkat requests Bani to releases her but Bani shocks her and says that only her death will free her.

Bani goes into the Mayavi cave and requests the voice to help her. However, the voice denies her and says that she's won't get everything just by asking.

Bani begs him to help her and suddenly a stairway appears when the voice tells her that the stairs will take her to the moon.

The voice tells Bani that she will have to lose her eyesight if she wants to reach the moon.

© Copyright tellybest.com, 2020, 2021. All Rights Reserved. Unauthorized use and/or duplication of any material from tellybest.com without written permission is strictly prohibited.
Cached Saved on: Saturday 23rd of January 2021 05:49:45 AMCached Disp on: Tuesday 26th of January 2021 03:25:19 PM