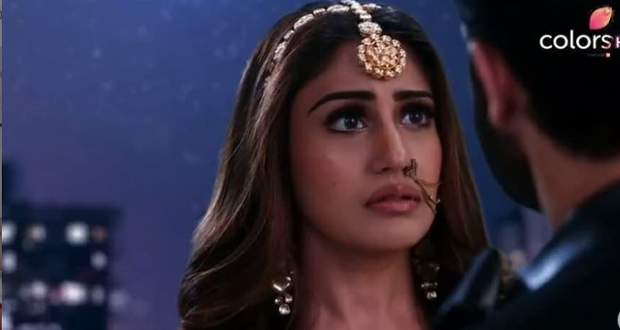 Today's Naagin 5 21 November 2020 episode starts with Jai asking Meera to drink. Veer is irritated by Jai while Bani wants him to not trouble Jai. Veer further warns her of not dancing with Jai.

Veer knows that Bani wants to learn about the negative energy and is therefore dancing with him. Jai starts dancing with Bani while Meera stares at Veer’s mother.

Veer starts searching for Bani while Jai reminds her that she is weak on that particular day. He wants to protect her and therefore takes her outside.

Jai signals Markat to attack Bani and she comes out from behind the tree. Bani starts feeling irritated and is shocked to see Veer’s mother as Markat.

Markat tells Bani that she is her biggest enemy and wishes to kill her. Further, they both get into a fight and Bani almost wins the battle.

However, Veer comes there and Markaat changes her form. Veer misunderstands Bani and thinks she has hurt his mother.

Jai asks Bani to attack Veer while he also wishes to gain all powers. (tellybest wu) Later, Bani confronts Veer and tries to make him understand the reality of his mother.

Veer is not ready to believe her while Bani tells Veer that Jai is with Markat. Bani says she has to end Markat and wants Veer’s support.

Jai watches a dream wherein he gets close to Bani. He goes out of the room and asks Bani to wait while Veer accuses Bani of betraying him.

They both start fighting and instigates Jai. Veer traps Bani in a box and traps Jai also in a room. Tapish takes Meera away while Bani wants to get out of the box.

Bani points out that his mother is laughing while Markaat again does acting. She asks Veer to let Bani go as she might have been misunderstood.

Markat enters Jai’s room through the sewage system and wants Jai to help her in killing Bani. She also wants to kill Balwant and other Cheels except for Veer.

Veer and Meera get confused to see Bani in the box and then in the garden.

Upcoming Naagin 5 episodes update: Bani learns that Jai and Veeranshu both are her sons.

© Copyright tellybest.com, 2018, 2019, 2020. All Rights Reserved. Unauthorized use and/or duplication of this material without written permission from tellybest.com is strictly prohibited.
Cached Saved on: Saturday 28th of November 2020 09:50:44 PM