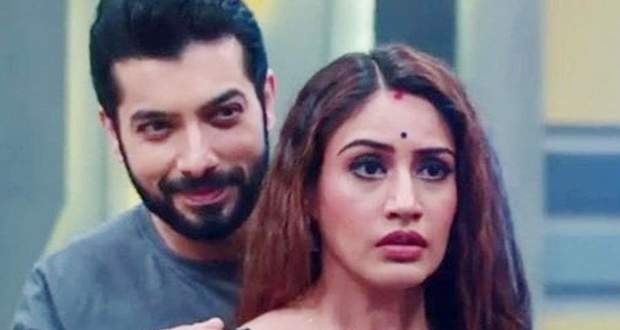 Today's Naagin 5 24 January 2021 episode starts with Veer asking Bani to call the intercom to ask dor a coffee to prove that she is not lying.

Bani sees Mr. Taneja and she takes Veer away to the cafeteria.

Veer asks Bani if she has a boyfriend which stuns her and she starts coughing while he helps her and says that Bani also tends to cough like this.

Veer pressures her to drink champagne while she will feel locks herself in the bathroom.

She takes her snake form and goes home while Veer breaks the door and gets confused not seeing Rani there.

Bani goes to Meera's room and she tells her to rest while she calls a doctor.

Elsewhere, Veer is drinking while Balwant tells Tapish to stop him.

Tapish goes there and talks with him while Jai looks through the window and thinks that or is the best time to take away Bani.

Meera tells the doctor to wait a while and goes inside when Jai attack the doctor and takes her form.

Jai tells Meera to get out of the room and is about to inject Bani with something when she hears a baby crying.

He mixes something in the water and gives it to Bani to drink.

She is about to drink the water while Veer comes there and throws the glass from her hand.

Veer goes outside the room while he also heard a baby crying and questions Meera if she heard it too.

Bani realises that she is pregnant and gets happy.

Elsewhere, Jai goes to the Tantric and berates him while a fluid-like substance emerges from a vessel.

The fluid-like substance takes a picture of Bani, Veer and a baby which makes Jai happy and he kills the Tantric.

Next day, Bani asks Meera to do as they planned while getting emotional.

Meera goes to Veer and tells him that she has a plan to get him close to Rani by inviting her to their farmhouse on a picnic.

Veer agrees but tells her to bring Bani with him also and goes.

Bani is packing her things and tells Meera that Jai is going to her while wondering who is against her.