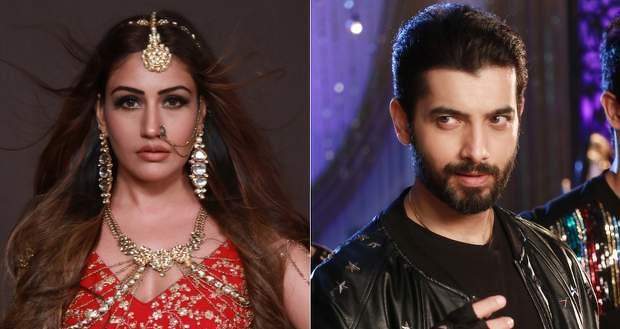 Chandni tells Veer that it is time to get ready while Bani starts climbing the stairs to the moon losing her vision.

Veer and Chandni sit in the Mandap while he hears Bani's scream and stands up.

Chandni makes him sit while Bani climbs the stairs and leaves the mandap telling the priest to do rituals with Veer.

Chandni goes to Bani and realises that she has lost her vision and reveals that Veer is sitting in the Mandap to marry her which shocks Bani and she argues with her.

Chandni shoves her and she falls to her house on earth and gets back her vision.

Bani tells Meera that she went to the moon and saw that Veer is getting married to someone on the moon.

Chandni goes back to Mandap and the wedding proceeds while Jai suggests Bani that she should marry him.

Meanwhile, Veer tells Chandni that he can't marry her without having his father and brothers see him.

A window portal opens up in his father's room.

Jai convinces her that Veer will come running when he hears that they are getting married.

Tapish tells Veer that Bani is also getting married to Jai.

Later, Bani and Jai enter the Mandap while Veer gets agitated seeing them together.

Balwant confronts Markaat and she reveals that it was all her doing while mocking him.

Balwant gets into her Cheel form and attacks her but isn't able to and starts arguing with him.

Elsewhere, the couples start doing their Phera's while Veer and Bani keep looking at each other.

Veer says his vows while Bani hopes that he comes back.