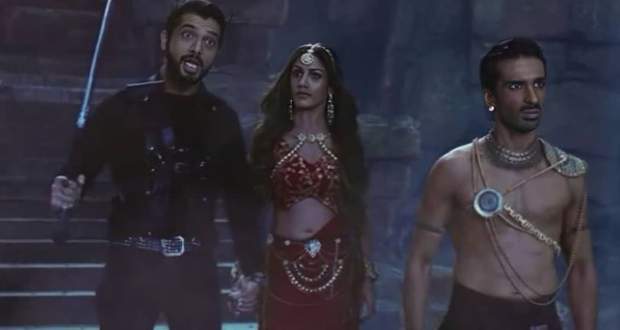 Today's Naagin 5 28 November 2020 episode starts with Bani sensing the Anant Jharna and remembers it from Satyug. Markaat follows her while Bani reaches the Anant Jharna.

A road is formed to reach the doors to the temple and a voice calls her. Meanwhile, Veer asks Jai about Bani and beats him to get information.

Bani is approaching the door when Markaat stops her. Bani knows Markaat can’t do anything alone while Markaat is very confident about her plan.

Bani and Markaat get into a fight and Markaat wishes to scare her. Elsewhere, Jai tells Veer that Bani must be in a cave.

Bani is trapped by Markaat in branches and Markaat leaves to go into the door. Later, Jai tells Veer that Markaat has taken Bani and that his mother is Markaat.

Jai also reveals that Markaat is his other as well. Veer gets shocked to learn this and gets worried for Bani as Jai tells Markaat wants to kill Bani.

Bani takes her Nagin avatar and attacks Markaat. Further, Bani is attacked by Markaat’s goons and she falls down on the floor.

The goons also tie Bani’s hands and feet using magical ropes. Markaat along with her goons performs some rituals and states that she will cut Bani into two pieces.

She says Bani will soon die on the black moon night. Markaat is about to cut Bani in half when Jai and Veer stop her.

Jai and Veer fight the goons as well as Markaat and open Bani’s ropes. Markaat tries to emotionally blackmail Jai and Veer but they are not ready to believe her.

Markaat vanishes while Veer and Jai treat Bani’s wounds. Jai tries to prove his innocence while Bani and Veer don’t trust him.

Meera is upset at the Singhania house for Bani. Bani and Veer arrive along with Jai and find Markaat sleeping in the bedroom in injured condition.

Veer and Bani ask her to show her true form while Tapish says his mother was there the whole day. They reveal that some animal attacked her.

Veer and Jai think their mother is saying the truth while Bani doesn’t trust her. Bani asks Jai when he found about Markaat.

He says that she was not the real Markaat but revealed that she is his mother. Jai reveals that Markaat wanted to have a son from Cheel as well as the Naag family.

Jai and Veer wonder what is Markaat’s plan while Bani is adamant to expose Markaat. Bani decides to sleep outside to keep an eye on Markaat.

Veer tries to make Bani smile and also decides to sleep with her in the hall. Meanwhile, Jai feels alone and realizes Veer and Bani love each other.

© Copyright tellybest.com, 2020, 2021. All Rights Reserved. Unauthorized use and/or duplication of any material from tellybest.com without written permission is strictly prohibited.
Cached Saved on: Saturday 23rd of January 2021 07:43:49 PMCached Disp on: Sunday 24th of January 2021 04:09:58 AM