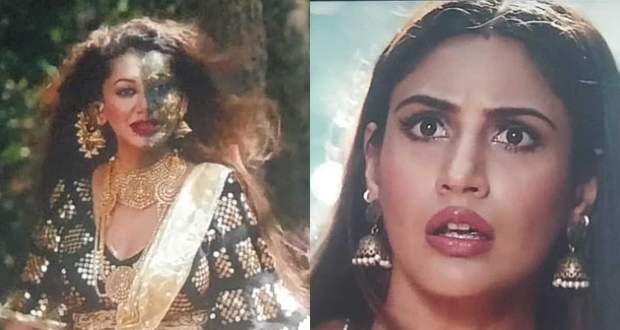 Today's Naagin 5 29 November 2020 episode starts with Veer informing Bani that he has asked Daksh to keep an eye on his mother Maarkat. Bani gets relieved and they both get closer on a couch.

Maarkat comes there and talks with Bani, while Bani wakes up Veer to show him the real face of Maarkat.

Maarkat disappears from there and Daksh tells everyone that Veer’s mother is sleeping in her room.

Bani says that Maarkat is playing games with them. Jai and Veer try to make Bani understand that Chandrakala was sleeping in her room and she was not there in the hall.

Veer asks Jai to get out of his room and to leave Bani alone with him. Veer teases Bani and she goes to sleep on the separate couch.

Veer lifts her in his arms and lies her down on the bed. He himself sleeps on the couch and Bani starts blushing over Veer’s cheesy talks.

Jai and Daksh stand outside Chandrakala’s room and keep an eye on her. Bani finds Chandrakala standing in the hall and questions her about her presence at two places.

Maarkat takes her snake form and gets out of the house. She further captures a small girl and takes her away from the house.

Bani follows her to save the small girl Koyal from her and threatens her to leave the child safely. Maarkat doesn’t listen to her and tries to harm the small girl.

She takes her animal form and eats the small girl, while Bani starts crying on not been able to save Koyal from Maarkat.

Bani goes back to the Singhaniya house and blames Chandrakala for killing the small girl. Everyone gets together in the hall and Chandrakala informs them that she was in her room.

Daksh and Jai agree to Chandrakala’s point, while Chandrakala tries to take sympathy from everyone.

A lady comes there and tells Koyal’s grandfather that she has found Koyal at the backside of the house.

Further, Chandrakala enjoys her victory by dancing in her room. She takes her Maarkat form and reveals that it was her twin sister who was helping her.

The next morning, Chandrakala asks Bani’s Chachi to call Veer’s family for the breakfast.

Bani tells Veer and Jai that Maarkat has a special power to present at two different places at the same time.

Jai takes Bani’s family out and Veer informs his family about Tabish and Meera’s wedding. Meanwhile, Maarkat attacks Jai and Bani’s family on their way.

Bani gets shocked to witness Maarkat at the house as well as at Jai’s place. Maarkat warns her to save her family first, while Veer makes a mistake of removing the eye from his mother.