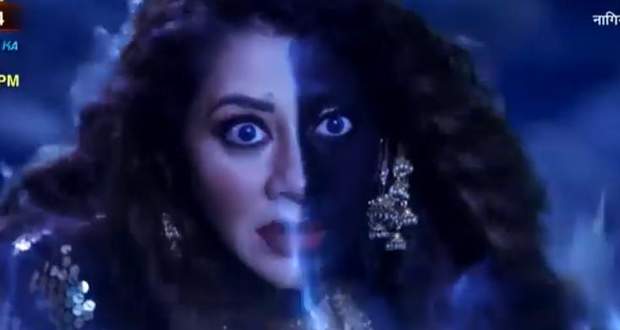 Today's Naagin 5 2 January 2021 episode starts with Bani informing Veer that she bought a gift for him that she wanted to give him the night he went to the moon.

Veer asks her for the gift but she says that she will give it to him after she finds out what's wrong with him.

Bani notices the scar on his neck and later tells Meera that the scar on Veer's neck has grown.

At the same time, Meera gets a message informing her about the details on Giant Caterpillar.

Bani thinks why Jai knew all of the precautions and goes to his room but doesn't find him there.

She finds water and garlic there and gets suspicious that Jai was behind the caterpillar attack.

Elsewhere, Veer is outside while Parekh brothers come there and make fun of him saying his wife fights for him which sparks a fight between them.

Bani comes there and is about to take her Naagin form but Veer stops her after which Bani grabs one of the goons by his neck and order them to leave.

Bani goes to her room sees that she has the same kind of scar Veer has on his neck.

Later, Bani goes to look for Jai and reaches a forest. She finds him digging a hole and grabs him by her tail.

Bani starts accusing him but he informs her that Maarkat has run away and says that she must have sent those creatures.

Bani comes home to warn Veer but gets the information that he has gone to do a business deal against his rivals, Parekh brothers with Tapish.

Meanwhile, Parekh brothers again beat up Veer and take him away.

Jai recalls his encounter with Maarkat at tells her that she went inside a hole and that is why he was digging a hole.

They both take their snake form and go inside the hole after which they come out near the reverse forest.

They are about to go inside when Jai informs her about Damdam lake's water which can heal Veer that Markaat had mentioned.

They enter the reverse forest and reach the Damdam lake.

© Copyright tellybest.com, 2020, 2021. All Rights Reserved. Unauthorized use and/or duplication of any material from tellybest.com without written permission is strictly prohibited.
Cached Saved on: Friday 22nd of January 2021 11:33:56 PMCached Disp on: Saturday 23rd of January 2021 04:10:02 AM