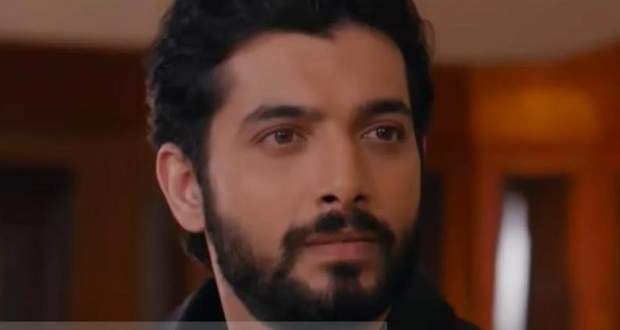 Tapish called Bani and informed her of their situation while Parekh brothers snatched his phone.

Veer falls unconscious and Parekh brothers take him to another place.

Meanwhile, Bani comes there and remove the magical net from Tapish, Daksh and reach Parekh brothers.

They fight off Parekh brothers and make them leave after which Bani brings out the bottle containing Damdam lake's water.

Jai looks on while recalling him freeing Markaat and her giving her the same bottle containing poison which he gave to Bani to collect Damdam lake's water.

Bani is about to give the water to Veer but sees Markaat and realises that the water contains poison and throws it on her face while berating her.

Markaat escapes while Tapish and Daksh take Veer home. Bani goes to the Shiva temple and does Tandav. She begs for Veer's life while a feather falls into her hands.

Feather goes towards the sky while Veer regains consciousness.

He regains his powers and looks for Bani to shows her his wings.

Bani informs him that Jai has betrayed them and went on Markaat's side.

Jai comes there and Bani berates him which confuses him. She takes his naagin form and is about to attack him when an arrow hits him from behind.

He warns her that Markaat is going to kill all of them while struggling to not pass out.

Veer removes the arrow and Jai informs them that they are thinking wrong and says that he has killed Markaat.

Bani and others go out and see Markaat's dead body which makes Balwant happy.

Jai falls unconscious and Veer orders Daksh to take him inside.