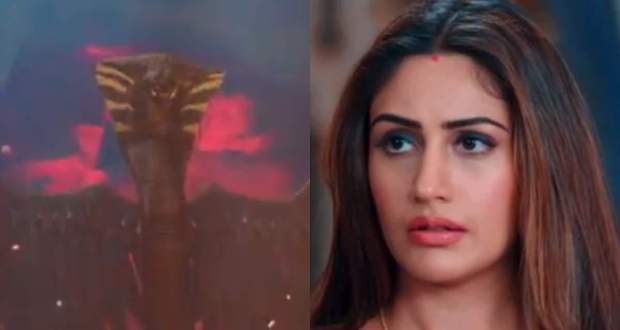 Today's Naagin 5 5 December 2020 episode starts with Bani’s family getting surrounded by fire. They all scream for help and Bani arrives there to rescue them.

She takes her Naagin form but all of a sudden the car vanishes from there. Maarkat comes there and says that she will not let her rescue her family so easily.

The Singhaniyas get shocked to see the house ceiling falling down. All of them get surrounded by various long nails which pop out from the floor and walls.

Maarkat warns Bani that she will kill Veer if Bani will move from her place. Further, she asks Bani to surrender her life to save both the families.

Veer feels that Bani is in danger, while Maarkat takes Bani near the Anant Jharna. She asks Bani to open the secret gate present in the cave.

Bani refuses to help her and takes her Naagin form. Maarkat introduces her twin sister to Bani, while Veer looks for Bani everywhere in the jungle.

He finds Jai there who tells him that Bani has made a deal with Maarkat to save their lives.

Veer tells Jai that Maarkat might have taken Bani to the Maayavi cave. Meanwhile, Maarkat hides the cave using her magical powers.

Bani bows down and asks Shiv Ji to help her in getting out of the problem. Bani gets courage and she almost kills both the Maarkats.

Bani refuses to kill them in the absence of Jai and Veer. Shiv Ji arrives there and holds Maarkat at the point of his Trishul.

Jai and Veer get into an argument over Bani’s topic. They both hit each other and get into a physical fight.

Bani goes in front of the secret door of the cave and prays to God to let her enter the cave.

The door gets opened and Bani finds a cold place behind it. Shiv Ji says that she is one of the few people who are allowed to enter from that door.

Bani is asked to close her eyes and she has gifted a superpower to sense future danger once in her life.

Bani reaches home in the blink of an eye and rushes to see everyone in the house. She meets her family and gets to know that they don’t remember anything that happened before.

Meera tells Bani that she likes Taapish and is ready to marry him. Bani gets excited and asks Meera to give a hug to her. She gets shocked to get a vision of Meera floating on water.