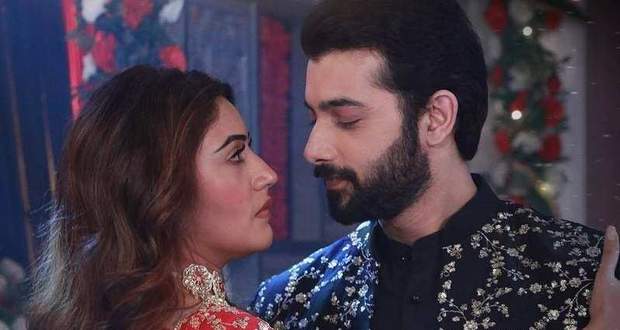 Today's Naagin 5 6 December 2020 episode starts with Bani getting a vision of Meera floating on water. She gets worried and Meera hugs her to calm her down.

Bani sees water around her, while Veer pulls her towards himself. He questions her about the reason for her worried mood.

They both tease each other, while Veer takes Bani to the washroom. Bani apologises to him for saying bad about his mother.

Veer applies for medicine on Bani’s wound. Jai knocks on the door and enters the washroom to talk to her about Maarkat.

Bani tells both of them that Bholenaath saved her life and she has captured Maarkat at a place.

All of a sudden, Bani again gets a vision of Veer drowning in water. She tries to save him and screams out of fear.

Later, Bani sees water waves in her dream but she gets wet in reality. Bani starts crying out of fear, while Veer tries to calm her down by giving her a hug.

Bani stays closer to Veer and hugs him tightly. Meanwhile, Singhaniyas teases Taapish for leaving his habit of drinking alcohol for the sake of his fiancé.

Bani decides to go to the Naag Mandir, while Veer drops her there in his car. Bani shows her care towards him and asks him to stay outside the temple.

Bani asks the wife of the priest to guide her regarding her problem. Elsewhere, Tapish behaves rudely with Meera on his family’s demand.

The wife of the priest screams out loud on witnessing the old books burned in the temple. Bani finds Maarkat’s feather near the burned books.

Meera hears a water leakage sound and goes to the bathroom to close the water tap. She gets stuck below the shower and couldn’t move her body from that place.

Bani decides to do tough Prikrama on her knees in the temple while holding Diyaa in both hands.

Bani gets the blessings from Bholenaath and he shows the vision of Maarkat’s life story to Bani.

Further, everyone looks for Meera in the house but they couldn’t find her anywhere. Bani rushes to see Meera and gets shocked to find her standing like a statue.

She saves Meera and tries to calm her down, while Veer enters his house screaming out Bani’s name.

Bani tells everyone that they have to leave the Singhaniya mansion right at that moment. Veer confronts Bani for leaving him alone outside the temple.

Bani apologises to him for her mistake but Veer taunts her for not understanding his feelings for her.

Bani informs him that they all have to go far away from the beach as they are all in danger.

Upcoming Naagin 5 episode update: Meera to be hypnotised while Bani and Veer get closer.

© Copyright tellybest.com, 2020, 2021. All Rights Reserved. Unauthorized use and/or duplication of any material from tellybest.com without written permission is strictly prohibited.
Cached Saved on: Tuesday 8th of June 2021 03:54:00 PMCached Disp on: Wednesday 16th of June 2021 12:53:50 AM