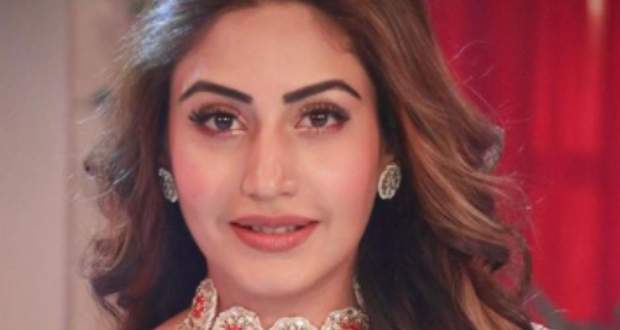 Today's Naagin 5 8 November 2020 episode starts with Bani slams Jai for forgetting that she is an Aadi Naagin. She says that she will definitely punish all the Cheels for their cruelty.

Bani refuses to kill Veer and tells Jai that she cannot kill an innocent. Jai gets angry with her but Bani says that it is her final decision not to punish Veer.

Balwant scolds Veer for thinking of keeping Bani at their house, while Veer says that he is deeply in love with Bani and feels a strong connection with her.

Balwant tells Veer that Bani will kill all of them out of enmity. Veer takes a stand for Bani and asks everyone to concentrate on Ponky’s marriage.

Everyone searches for Mayuri in the house but couldn’t find her anywhere. Veer gets a video call from Mayuri and she tells everyone that she wants some time to think about her marriage.

Balwant says that he believes Mayuri is actually not the real Mayuri. Later, Jai arrives there and decides to stay at the Singhaniya mansion for Bani’s safety.

Veer refuses to let him stay there while Bani asks Veer to stop interfering in her life. Bani tells him that she will take her revenge on the Cheels.

Veer says that he doesn’t want her to believe Jai. Further, Veer doubts Jai for knowing about Mayuri’s room.

Balwant decides to get rid of Aadi Naagin and Aadi Naag by taking help from the powerful source Markaat.

A lady screams for help captivated in the basement of the Singhaniya house, while Bani pledges in front of Devi Maa that she will take her revenge from the Cheels.

Bani realizes that Balwant is hiding someone from the family. Balwant warns Bani not to go to the basement ever again.

Veer and Jai get into an argument whereas Bani throws Veer out of the room. (tellybest wu) lThe next morning, Bani orders everyone to eat Satvik food till the Navratri ends.

Bani overhears Veer’s brothers talking about Noor’s incident and learns that Noor was killed by the Cheel brothers.

Meera takes Monil to the bathroom and tries to seduce him. She pushes him in the bathtub and changes herself to Bani.

Bani tries to drown him in water, while Jai asks Shukla to call the Singhaniyas back home. Bani listens to someone crying and notices that the voice is coming from the washbasin.

She then takes her Naagin form and goes to the locked room through the pipe.