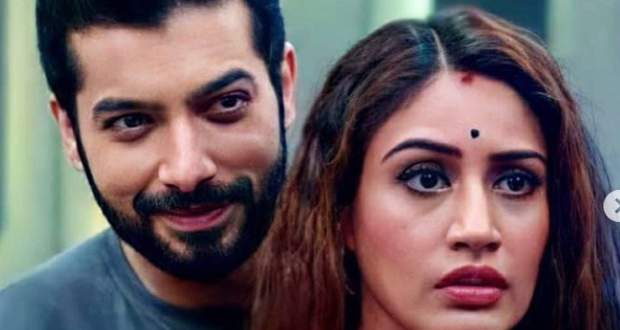 Today's Naagin 5 10 Oct 2020 episode starts with Veer asking Mayuri to send a voice note to Jai. He asks her to invite Jai to Prayag Pahaadi on behalf of Bani.

Further, he asks Mayuri to keep an eye on Bani and threatens to kill Jai. Veer warns Bani that she trusts the wrong person while Bani still trusts Jai.

Jai is sure that Mayuri is not texting on behalf of Bani and is sure something huge is happening at the Prayag Pahaadi. Mayuri and Bani get into a fight while later Bani acts of being unconscious.

She gets the information from Mayuri by attacking her as a Naagin and learns everyone has gone to Prayag Pahaadi. Bani learns that someone from Singhania's house has killed Teer.

Veer asks other Cheels to hide on trees while Jai takes Naag form and comes to Prayag Pahaadi. Veer creates a plan and traps Jai. He gets surrounded by a lot of Cheels from all directions.

Bani tries to reach the Prayag Pahaadi while Mayuri stops her. However, Bani takes a Naagin form to beat Mayuri. Meanwhile, Jai lies to Veer and other Cheels and tries to play innocent.

Veer is about to throw Jai off the cliff when Bani comes and saves Jai. Bani says Jai has not done anything and shows him Teer’s jacket. Balwant learns about Teer’s death and gets shattered.

Bani also shows the knife she found in the security room while Balwant wants to kill Bani. Veer doesn’t let anyone touch Bani and threatens to kill them if they approach.

Bani continues to trust Jai while Veer is adamant to prove Jai is not innocent. (tellybest.com wu) Veer takes Bani home and feels bad that she doesn’t trust him. Meanwhile, Mayuri tries to talk to Ponky while he gets scared.

Bani rebukes Veer while Veer is sure he will make her fall in love with him. Veer puts Sindoor in Bani’s hairline and also makes her wear the Mangalsutra. He is sure that Bani will love him while Bani remembers Aakesh.

Jai comes to the Market to become his follower and learns that Veer is the only obstacle in his path. The market also reveals that Veer will soon regain his memory when the sand in the hourglass ends.

Veer wants Bani to share a bed with him and also puts a curtain in between to separate their parts of the bed.

© Copyright tellybest.com, 2018, 2019, 2020. All Rights Reserved. Unauthorized use and/or duplication of this material without written permission from tellybest.com is strictly prohibited.
Cached Saved on: Monday 30th of November 2020 03:46:36 PM