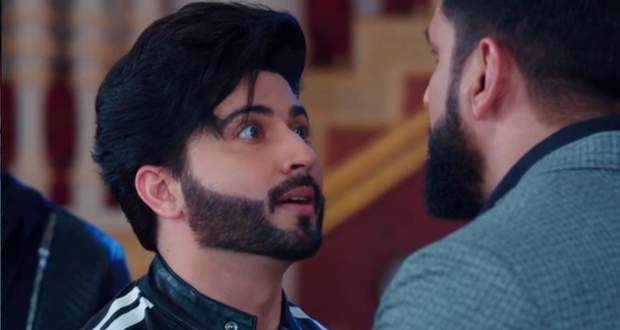 Today's Nagin 5 11 Oct 2020 episode starts with Bani leaving from her room in the Naagin avatar. She witnesses Balwant talking about Kaal Kanak, the hourglass.

Shukla tells Balwant that the Kaal Kanak has stopped. Bani leaves from the house in her Naagin avatar and Daksh smells a snake around him.

Jai and Mayuri stop Shukla in his way and they decide to kill Veer as soon as possible. Later, Jai fakes Bani’s voice and calls Veer for help.

Veer takes his Cheel form to save Bani, while Jai traps him in a cage. He says that Veer will be dead on the Purnima night at the Banjar Pahaadi.

Elsewhere, Bani falls down in a room from the AC duct and finds some shiny substance there. (tellybest.com wu) Jai takes the cage to the Banjar Pahaadi where he will meet the most powerful Cheel Shakura.

Bani finds a room full of jewels and expensive things. She witnesses a locked door and tries to open the door with her tail.

Jai, Shukla, and Mayuri decide to have a deal with Shakura and they will set him free for doing their work. Jai asks Shakura to disguise as Veer, while Shakura agrees with the deal.

Bani finds a magical stone moving towards her, while a person keeps an eye on her from the locked room.

Daksh sees the hourglass working again and informs Balwant about the same. Balwant worries for Veer and asks him to come downstairs.

Jai gave Veer’s picture to Shakura but the picture gets changed and Shakura disguises as someone else.

Bani shows the magical stone to the priest’s wife and asks her to call the priest. The lady informs her that the priest is no more and Bani gets a shock on hearing this.

Aakesh makes an entry in the Singhaniya house and Balwant is surprised to see him in Kalyug. Aakesh calls himself Veer and tells everyone that he remembers everything now.

Bani overhears their conversation and gets shocked to witness Aakesh in the form of Veer. Balwant asks Veer to get rid of Bani first of all, while Veer introduces himself as the husband of Bani.

Veer forcefully makes Bani dance with him and then Bani leaves for her room. She recalls about Aakesh, while Veer comes to the room and flirts with Bani.

He shows his Cheel form to Bani and asks her to show her Naagin form. Bani shows her red eyes to Veer, while Veer threatens her with a knife.

Upcoming Nagin 5 episode update: Aakesh to kill Bani by throwing her from the height.