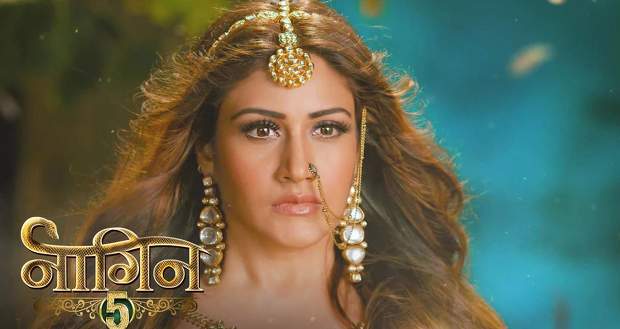 Today's Nagin 5 12 Sep episode starts with Veer flying away while Jai and Bani learn his truth. Jai and Bani decide to kill Veer and his whole family.

Bani decides to kill the close ones of Veer first before targeting him. Meanwhile, Chachi is excited about Meera’s wedding and asks her daughters to trap rich guys at the engagement.

Bani returns and is asked to get Meera ready. Later, she asks Meera if she likes Veeranshu Singhania and wishes to speak the truth. Bani tells her that she has got the answers to his connection with Veer and Jai.

She reveals that Veer is an evil person and that he is a Cheel. She also tells his plan of killing Cheels while Meera assures that she trusts her. Later, Bani tells Jai that she is going for the Roka and is going to kill everyone alone.

Balwant is hiding something in the house and has organized the Roka at the adjacent house. He also learns that Veer has just returned and is healing himself.

Bani and family reach the house of Singhania’s and are surprised by boys performing on a song. Bani takes her Naagin avatar and starts killing Veer’s family members. However, it is just Bani’s dream while Veer brings her back to reality.

Meera learns that the Singhania family is also involved in human trafficking and tells Bani about it. Tapish is suspicious about Bani keeping an eye on everyone.

Meanwhile, Jai is extremely angry and comes in his Naag avatar to save Aarohi. Aarohi gets shocked to see him in that avatar while his brother gets excited. Elsewhere, someone in Singhania's house is locked in a room.

Bani comes in the main house while Veer follows her. Bani gets close to him to mock him while Veer recalls his past life memories. Veer tries to go near Bani while Jai stops him.

Bani reveals that she will marry Jai the same day Veer and Meera are getting married. Elsewhere, Balwant gives food to the mysterious person he has kept in a secret room.

Bani and Jai reveal in front of their families about getting married. Jai’s family is surprised while Bani’s Chachi creates a scene. Meanwhile, Veer knows Bani will marry him to save her sister.

Upcoming Naagin 5 episode update: Bani and Veer get in an intense fight while later Bani gets shocked to see someone.