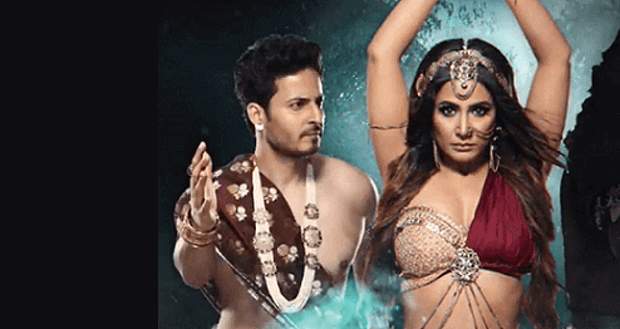 Today's Nagin 5 16 Aug episode starts with Aakesh arriving in the temple with his team of Cheels and trying to destroy the Shivling. This makes chaos between Naagins and Cheels.

Aakesh stabs Hriday with a knife and Naageshwari runs towards Hriday. Aakesh forcefully holds Naageshwari’s hand and tries to take her away with him, but Naageshwari pushes him away and tells him that she will kill her 1000 times.

She turns into Naagin and bites Aakesh, whereas Aakesh accepts his death given by Naageshwari and says, Qabool Hai. Naageshwari kills him and then goes to see Hriday and asks him to open his eyes.

Lord Shiva appears there and regrets for giving the boon to Naageshwari that she can change herself into human form.

He tells her that after a hundred years all the Naagins can become Icchadhaari except Naageshwari. He reveals to her that she can get a rebirth only when the secret of the temple will be disclosed after ten thousand years.

Naageshwari regrets for allowing Cheels to get into the temple. She promises Hriday that after ten thousand years she will come back to him. She stabs herself with the same knife which was used to kill Hriday.

In the present time, Naageshwari tells Brinda that she waited for ten thousand years, while Dev regains consciousness and Brinda hugs him tightly.

She tells Dev that Naageshwari is the one who saved his life and then they both leave from there happily. Naageshwari gives Naagmani to Shiv Ji and prays to him to help her in finding back her love again.

After 40 years, Naageshwari takes rebirth as Baani (Surbhi Chandana). Baani gets a flashback in her dream and gets scared.

She leaves to make arrangements for her friend Noor’s marriage. Noor gets ready for her marriage and doesn’t find something so she calls Baani for help.

Later, Noor gets scared of finding a snake in her room and starts screaming out of fear. Baani arrives there and holds the snake smoothly in her hand.

She starts talking to the snake and makes it leave the room through the window. She then takes Noor to the hall for her marriage ceremony.

Hriday takes rebirth as Jai (Mohit Sehgal) who makes a romantic entry in the marriage. Baani and Jai see each other when a curtain falls on them and both of them feel a connection with each other.

Aakesh takes rebirth as Meer (Sharad Malhotra) who arrives drunk in the marriage and misbehaves with everyone. He congratulates the groom Ahmed and gifts him female nightwear and tells everyone that it belongs to Ahmed's fiancé Noor.

Meer reveals that Noor spent her previous night with him and forgot to take her nightwear. Baani gets angry on him, while Jai shouts at Meer to stop this nonsense. Noor’s fiancé cancels the marriage and leaves from there with his family.

Upcoming Nagin 5 episode update: Jai and Meer get into a fight.