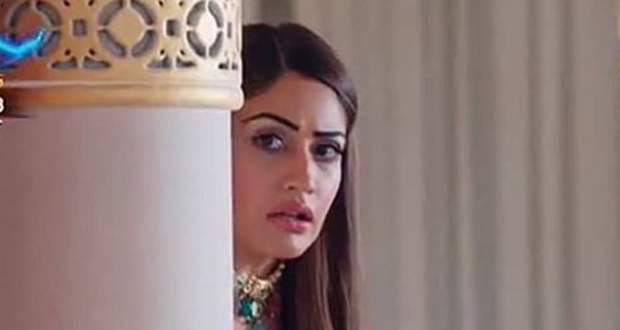 Today's Naagin 5 17 Oct 2020 episode starts with Jai asking about their plan from Shukla. Jai wants to know why the disguised person took Akesh’s form instead of Veer.

He is also sure that his plan will work. Meanwhile, the disguised Akesh challenges Bani and is flying in the air holding Bani in his arms. Aakesh says he will kill Bani without even touching her.

He leaves Bani from a height while Shukla and others wait on the ground with poisoned knives. However, before Jai can attack Bani, Akesh saves Bani and puts her on the ground.

Bani gets angry and argues with her while later they return home. Akesh knows Bani can’t attack him first while Bani shows him attitude. Later, Jai gets angry at Shakura for not killing Bani and they get into a fight.

Jai wants Shakura to follow his orders while Shakura aka Akesh argues with him. Jai warns him of having his freedom while Shakura says he will bring Bani.

Akesh aka Shakura admires Bani’s beauty and later gets angry. He breaks the door of the bathroom while Bani takes the Nagin avatar. Bani gets angry at him and wants someone like Jai in life.

Bani gets confused as Akesh doesn’t call Jai a Dhabha Wala as Veer used to. Meanwhile, Balwant learns that Gandhak Pathar is missing and thinks Veer has taken it.

Further, a woman states that Aadi Nagin can also use the Gandhak Pathar. Balwant confronts Veer and he is unaware of the Pathar. (tellybest.com wu)Bani overhears their conversation and gets suspicious of Veer aka Shakura. She also wonders why Cheels are so worried.

Shakura tells Jai about the stone. Bani tries to control the stone in the cupboard. Bani decides to use Bees to make Veer attack her first. Elsewhere, Jai enters the temple and finds some books.

Bani opens the bee box and bubbles come out instead of bees. Mayuri tells Jai that Shakura is romancing with Bani while the wife of Pandit overhears their conversation. She learns that Jai is planning to kill Bani.

All the Cheels are attacked and they all float in the air. Balwant asks Veer aka Shakura to do something while Shakura is clueless. Bani gets suspicious of Veer not doing anything.