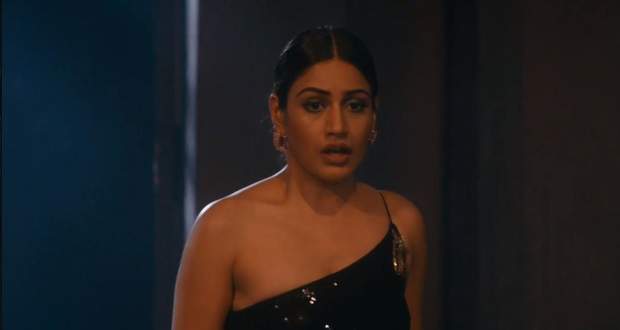 Today's Naagin 5 18 October 2020 episode starts with Balwant calling Veer to control the Gandhak Pathar. Veer aka Shakura leaves from there and scolds Jai for not telling him anything about Gandhak Pathar.

Bani takes her Naagin form and helps the Singhaniyas to come down on the ground. She holds the Gandhak Pathar in her hand and keeps it in her almirah.

Bani gets suspicious of Veer’s actions and wonders that something is fishy. Later, she blows candles in the balcony and calls Veer to that place.

She keeps on asking questions to him to catch him lying. Shakura remembers all the Satyug events told by Jai, while Bani catches him lying when she talks about the Suhaagraat.

Bani overhears Balwant and Daksh talking about Veer not been able to save them by the Gandhak Pathar. Balwant asks his family members to search for Gandhak Pathar in Veer’s room and plans to kill Bani.

Meanwhile, Balwant and the other Singhaniyas go to Veer’s room and Bani tells them that she saw them flying in the air.

Bani lies to Balwant that Veer saved all of them from the Gandhak Pathar. Balwant asks Veer to find the stone, while Shakura wonders why Bani is lying about the stone.

Veer confronts Bani for lying to his family, while Bani witnesses the wife of the temple priest outside the Singhaniya mansion.

The wife of the priest informs Bani about the power of the Gandhak Pathar and asks her to keep the stone safe in the positive atmosphere. (tellybest.com wu) The lady warns Bani to keep the stone with herself and to not let it get into any evil hand.

Bani rushes to get the Pathar from her almirah and Mayuri notices her hiding something in her purse.

Later, Veer aka Shakura and Bani leave for the Pahadi in their car, while Mayuri and Shakura follow them after informing Jai to come there.

Jai reaches the Pahadi and takes the help of Maayavi Ras to create an illusion for Bani. Meanwhile, Bani gets out of the car and asks Veer to call the Gandhak Pathar.

He tells Bani that he got the Gandhak Pathar and leaves from there in his Cheel form. Bani sees volcano in front of her and Mayuri and Shukla attack her in their Avatars.

Mayuri and Shukla trap Bani behind the bars and reveal that they know about her identity of being the Aadi Naagin.

Bani decides to order the Gandhak Pathar to trap Shukla and Mayuri. They both get trapped and shouts at Bani to release them.

© Copyright tellybest.com, 2018, 2019, 2020. All Rights Reserved. Unauthorized use and/or duplication of this material without written permission from tellybest.com is strictly prohibited.
Cached Saved on: Saturday 5th of December 2020 04:43:30 AM