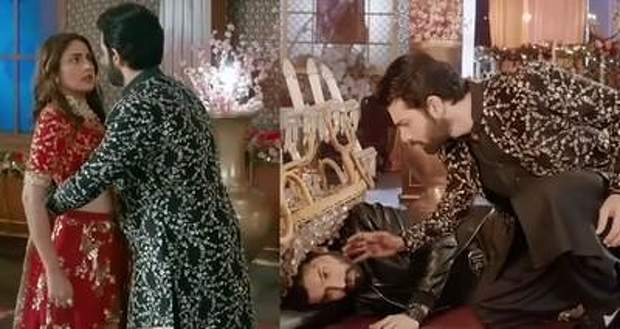 Today's Nagin 5 19 Sep episode starts with the Panditji finding two moons in the sky. Veer finds his brother dead while Bani wonders if she has killed an innocent person.

Veer questions Bani why she killed his brother while Bani accuses him of killing her lover Jai. Veer and Bani argue and later Veer questions how she managed to kill him as he was a Cheel.

Bani decides not to tell Veer that she knows they are all Cheels. Veer decides to make things right and wishes to take revenge. He takes her Dupatta and ties it around her and his waist.

Veer threatens to marry Meera if she doesn’t agree to marry him. Veer and Bani start the marriage rituals while Bani wonders who was Veer’s brother. They both are getting married to take revenge from each other.

Veer puts ashes instead of Sindoor in Bani’s Maang. He further puts chain instead of Mangalsutra around her neck. Meanwhile, Shukla comes in front of Markat and reveals he has seen the Naagin. It is revealed that Veer’s brother was killed by Shukla.

He gets some instructions from Markat statue and leaves. Later, Bani and Veer visit Bani’s house while everyone is shocked to learn that they got married. Bani’s Chachi gets mad at Bani but is excited to see the jewelry offered by Veer.

Bani enters the Singhania mansion and the Singhania boys plan a unique Grah Pravesh for her. She is expected to pick up alcohol bottles while being on one leg. Bani is not able to pick last bottles and Veer picks her up to take her to their room. Veer ties Bani in the room and leaves to party.

Upcoming Naagin 5 episode update: Bani gets in her Naagin avatar while a new Nagin makes her entry.